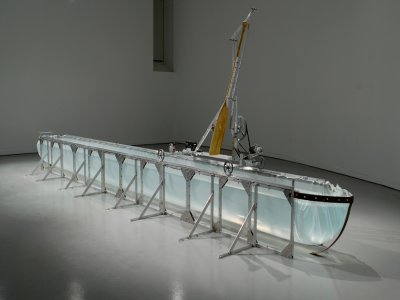 Bringing together five Canadian machine-makers, Schematic: New Media Art From Canada is a group show currently on view at London's [ space ] gallery. Curator Michelle Kasprzak begins her essay accompanying the show with a description of Jacques de Vaucanson's duck. Citing the appeal of this quirky and captivating invention within its time, she argues that machines today continue to instigate the same degree of fascination, a response to enduring questions of representation and behavior. The show also claims that the group of artists selected -- Peter Flemming, Germaine Koh, Joe Mckay, Nicholas Stedman, and Norman White -- draw on their particular experience as Canadians in their exploration of such themes as weather, the environment, and craftsmanship. I don't know if those topics are necessarily "Canadian", but I had to chuckle a little bit at the explicit play on the rugged frontiersmen stereotype. That aside, the most compelling strand in the show seems to be that of futility and failure. Three works -- Joe McKay's The Big Job, Peter Flemming's Canoe, and Norman White's The Helpless Robot -- engage in actions that reflect the limitations of machines and often their inutility. The Big Job is a mechanical progress bar that moves in accordance to a loading webpage. Repeating infinitely as the page reloads over and over again, it serves as both documentation and a representation of frustration. Similarly, Peter Flemming's Canoe paddles itself to nowhere, while The Helpless Robot relies entirely on the aide of visitors to move about the gallery, actions which are dictated by a synthesized voice. Rather than cater to the "gee whiz" quality of machines, these projects elicit another concurrent response, which is, of course, "goddammit".

Now I really I wish I could get to see that show.

I don't think the topics are meant to be Canadian, I think it's the responses. And they are at least defensibly Canadian. ;-)