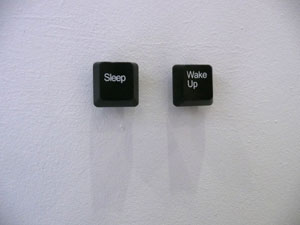 Given that you're reading this article on a blog (a blog that addresses technology, in fact!), you are quite likely familiar not only with the phrase "Web 2.0," but moreover the concept of beta versions. The latter are ideas or applications that are the result of extensive research and yet manage to live an active life despite being defined by their own self-admission of imperfection. The Centre Pour L'Image Contemporaine in Sant-Gervais Geneve has made "Beta" the theme of their 2008 Version Biennial. The show consistently surveys contemporary work in emergent media, but this year's exhibition and related public programs investigate the state of new media art from a perspective of transition. Their position is that the field's been around long enough to have established some standard operating procedures, but there is a question as to where it's headed. More than anything, their question is that of the state of the new media artist. Is she an inventor? Someone for whom the tools are secondary to or primary to their work? Or someone who places technology first or second in their creative practices? In the case of the Centre, their effort is even to expand what we might consider art, by looking at the artfulness with which media and tech skills are applied in different social scenarios. A series of workshops, screenings, performances, and public forums will augment the installed exhibition and seek to flesh-out preconceived notions about issues like real-time communication, disembodiment, virtuality, mobility, and reproducibility that once seemed inherent to new media and yet may now be in need of updating. Meanwhile, the Centre is presenting important works by Vaibhav Bhawsar, Bureau d'études, Coldcenter, John Klima, Golan Levin, Julie Morel, Esther Polak, Andrea Polli, Tania Ruiz, Mizuki Watanabe, and many others -- so you can take in the cutting edge while getting your critical discourse on. - Marisa Olson