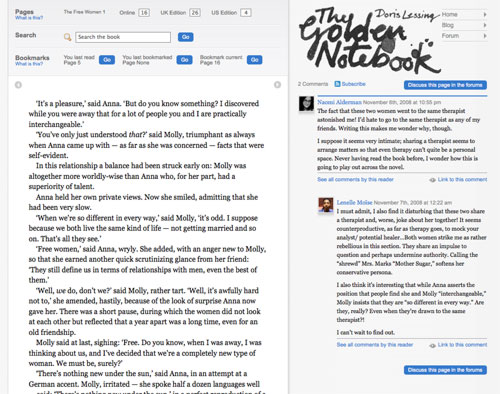 In his 1970 book S/Z , Roland Barthes attempted to interject a new form of textual interpretation which foregrounds the experience of the reader. His description of the topos of meaning in which a text passes is beautifully prophetic to the sensation of reading within the networked environment, stating, "The blanks and looseness of the analysis will be like footprints marking the escape of the text; for if the text is subject to some form, this form is not unitary, architectonic, finite: it is the fragment, the shards, the broken or obliterated network -- all the movements and inflections of a vast "dissolve," which permits both the overlapping and loss of messages." Barthes' sentiments echo through the genre of electronic literature, emergent in the 1990s, and carry on in the Institute for the Future of the Book's latest project, The Golden Notebook, which went live yesterday. This 1962 novel by Doris Lessing candidly chronicles the life of Anna Wulf, and is narrated through the vantage of several separate notebooks. Uploaded on a site similar to Google Books, the Institute invited seven notable female authors to read the book and carry on conversations in a forum adjacent to the text. While group discussion online is old news, the possibility of uploading and reading entire books online is still a recent development, and it carries with it a number of crucial debates. By adapting the model of a reading group, one that parallels the text itself, it follows precisely with the Institute's mission to investigate the "ecology of readers, authors and texts" surrounding the networked book. One other dimension to the project, which is strangely absent from the press release and the site's Q&A section, is the decision to invite a group of female writers to collectively read a highly regarded feminist novel. Clearly, this will influence the ensuing conversation, and, most likely, make it a more interesting read overall.