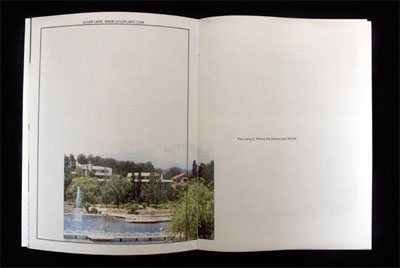 FAUND is a magazine comprised of images found on the internet. For their first issue, which debuted last month, Switzerland-based editors Daniel Pianetti and Renato Zülli invited artists Peter Sutherland, Guy Meldem and Constant Dullaart to submit their finds. Their second issue comes out today, with images collected by artists Oliver Laric, Samuel Nyholm, Chris Coy, Sorryimissedyourparty, and Justin Kemp. As a seemingly natural extension to sites such as ffffound, the magazine spotlights the curatorial taste and direction of each individual artist. I asked Daniel Pianetti and Renato Zülli a few questions about their project via email. - Ceci Moss

How did you come up with the idea for FAUND?
We noticed that we were spending more and more time surfing for images on the Internet for pleasure, that's how we discovered sites where people can collect found images (ffffound, flickr, as-found...). We often focus our attention on the person who's finding, we think that you can understand a lot about this person judging by his finds. That's why we decided to create a paper magazine that highlights finders by inviting and spotlighting them as guests. Also, by printing the found images they become more durable.

How did you solicit artists to contribute?
Usually we choose the artists judging by their approach to general appropriation art. We simply ask them to send us any amount of image links, without imposing a specific theme on them. The only rule is that they can't submit images that they've modified. We select the guests after considering the creativity of their finds. Until now, we've had a good response because it's an unusual request. 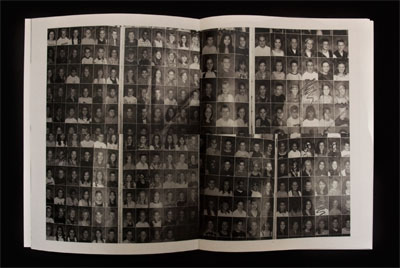 Do you plan to continue publication on a monthly basis?
We never intended to impose a fixed schedule but we're enjoying the project as it goes on and the monthly basis seems like a good rhythm. We're flexible because we want to keep improving, so we'll adapt our publication (period and circulation) based on the means and requests of distribution.

Your second issue comes out today. What finders did you select for this issue?
Oliver Laric, Samuel Nyholm, Chris Coy, Sorryimissedyourparty and Justin Kemp.

What has been the response so far to your first issue?
The first issue had a good reaction, both through sales and feedback. We've received both positive and negative feedback, our concept provoked a debate about the right to use someone else's images without credit, but we defended ourselves as we see the publication as an extension of appropriation or readymade art. For the cover of the second issue, we printed an example of one angry response to our publication. 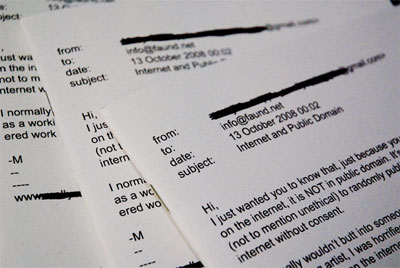