Breaking the Rules
By Marisa Olson 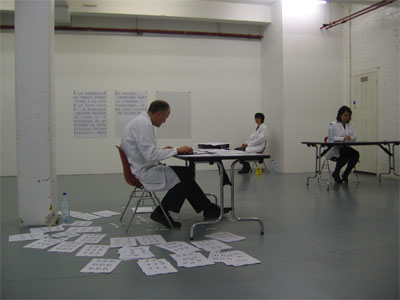 For an invention meant to help us express ourselves, language sure comes with a lot of rules. To some, this is an exciting artistic challenge, while to others this is a barrier to the full expression of an identity that may no more adhere to a culture's norms than it does to the grammar of the mother tongue that culture gave her. This quandary has led many media studies scholars to take an interest in the relationship between natural languages and computer languages, between social codes and computer codes. A new online exhibition, entitled "You Own Me Now Until You Forget About Me," traces these issues and adds to the grist questions about the ownership of language (from authorship to identification with a lexicon to branded alignment with various software platforms, etc) and the looming potential of languages to die. Enveloped within these issues is an aspiration to study and encourage human interaction, and to preserve the traces of these conversations. The show includes work by Karl Heinz Jeron & Valie Djordjevic; Martin Wattenberg & Marek Walczak; Codemanipulator; J�rg Piringer; carlos katastrofsky; Mary-Anne Breeze (a.k.a. mez); and Christina Goestl. Some of these contributions are classic net art pieces already experiencing the interestingly adverse effects of time on web-based media, but all of them are important contributions to this discussion of communication. Surf them for yourself and then add to the show, if you'd like. That's right! Curators CONT3XT.NET have adopted an open curatorial model that allows visitors to chime in and widen the vocabulary used "in the exploration of our language with its arbitrary systems and rules, its corresponding functions within society, as well as with its absurdities and restrictions for the individual." The show will also be installed at the Museum of Modern Art, Ljubljana from May 16th-June 22nd, 2008. - Marisa Olson