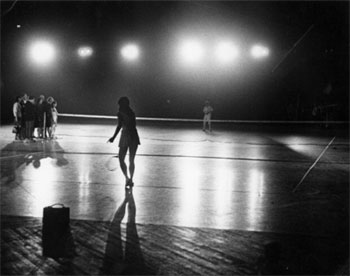 Artist Robert Rauschenberg passed away on Monday. He was 82. Easily one of the most significant artists to come out of the twentieth century, Rauschenberg began painting in the 1940's, and eventually integrated collage, sculpture, performance, choreography, set design, and printmaking into his trailblazing practice. Throughout his career, he was continually dedicated to the concept that the artist must take on an active, participatory role in relation to the culture at large. This perspective was perhaps encouraged and strengthened while studying in the 1950's at the experimental and visionary Black Mountain College. During this period, he met John Cage and Merce Cunningham, and in 1952, the three participated in Theater Piece #1, cited by some as the first "happening" which involved the simultaneous performance of music, dance, and visual art. In 1967, he co-founded the groundbreaking organization Experiments in Art and Technology, whose mission to foster collaborations between artists and engineers served to bolster the creative application of new technologies in ways unimaginable before. To this day, the formation of Experiments in Art and Technology, along with the series of performances in 1966 from which it emerged, 9 Evenings: Theatre and Engineering, mark a major milestone in the history of art and technology. Rauschenberg's openness to experimentation- both formally and conceptually- remain one of his principal contributions to American art. - Ceci Moss