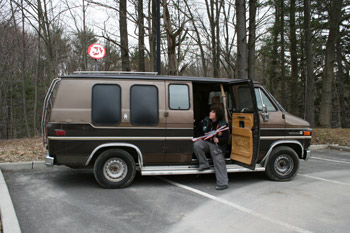 Net art and mail art have often been compared. Afterall, no matter how static a website may look, getting there, and seeing what you're meant to see is a process that relies on a series of messages being transmitted and received. For an artist like Lisi Raskin, mail (the "snail" or electronic variety) would be a ripe topic. The Brooklyn-based artist often creates installations and scenarios predicated on paranoia in relation to the government, so what better a topic than federally-controlled communication? (Don't forget that the U.S. government invented email for internal communication.) Officially, her practice is described as "a sublimation of childhood fears of and adult desires for nuclear apocalypse into a slightly twisted and highly physical recreation involving makeshift production and playfully dark fantasy." While Raskin's interest in fear is situated as "post cold war" it is rather timely in the era of orange alerts, and the question raised is of the degree to which the government produces and trades on fear. She's further interested in the history and fantasies associated with land use discourses, so for her residency at Bard College's Center for Curatorial Studies, the artist seeks to explore the impact of military facilities on the landscape of the American West. From April 15th-August 31st, Raskin's rolling in a super tricked-out van to tour the sites of nuclear tests and facilities, and responding site-specifically by making sculptures and drawings, sending transmissions, and mailing dispatches back to the gallery at Bard, where grad students are working in her "post office" to receive and display the mail. Entitled Mobile Observation (Transmitting and Receiving) Station, the project's game plan is an interesting inversion of the traditional model of the residency, and in some ways mirrors the partially-decentralized distribution of information enabled by networks like the internet. The space between the messages and even potential systemic barriers to their receipt raises interesting questions about the process by which these electronic and paper-based "transmissions" will be encoded, broadcast, and decrypted. Given Raskin's interests, one wonders if there will be any wiretapping involved--but perhaps even that fear's just another media spectacle in the theater of terror. - Marisa Olson