Watching the Watchers
By Tyler Coburn 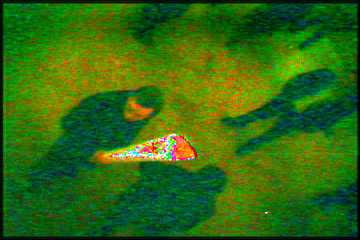 The third in a series of roundtable discussions at the New School co-organized by the Vera List Center for Art and Politics and Index for the Disappeared, "Agency + Surveillance" assesses the rhetoric of watching in a post-9/11 environment, partly by examining how a handful of engineers, artists, and activists have responded, in their own work, to the increasing state of national security. By inverting the top-down power structure conventionally associated with the act of surveillance, these practitioners are engaging in "sousveillance": a method of "watching the watchers," whereby visual and other data, habitually obscured from public knowledge, finally becomes apparent. Panelist Jenny Marketou's series Flying Spy Potatoes (2003-2004), for example, consists of digital recordings made in New York City public spaces declared to be high-risk targets for terrorist attacks, including Grand Central Station and the World Financial Center. The artist mounted a wireless camera and radio receiver on a helium balloon -- an innocent enough prop to make her infiltration a success. Urban pedestrians are provided with an interface for mapping and avoiding closed-circuit television cameras (CCTV) in iSee, a web-based application from the Institute for Applied Autonomy and member/panelist Tad Hirsch. Since its inception in 2001, the application has evolved to provide maps of several cities, a handheld counterpart, and other functions, such as the ability to correlate crime statistics with surveillance camera locations. These projects draw few, if any, boundaries between aesthetic, conceptual and pragmatic agendas, as if to suggest that a phenomenon like surveillance, which affects every aspect of our everyday lives, requires comparably broad-reaching counter-methods. "Agency + Surveillance" takes place on Monday, March 31st at 6:30 pm in Arnhold Hall. - Tyler Coburn