Pong In Action
By Marisa Olson 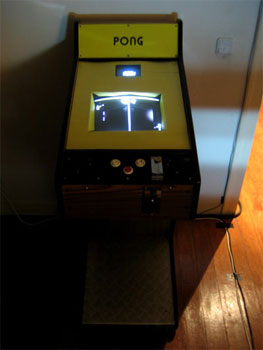 When the Atari video game Pong was released in 1972, it was instrumental in establishing what many today call computer culture, by virtue of its popularity and accessibility. The first product to find success as both an arcade game and a home console staple, it became a seemingly-ubiquitous touchstone for the members of a DIY generation empowered by play and home-hacking. In the 35 years since its release, the first generation video game has retained this mythos, even as technology has evolved around it. Lisbon-based artist André Gonçalves's new project, Pong--the analog arcade machine comments on the increased use of technology by artists seeking to address cultural or historical epochs, such as the one in which the original game participates. Gonçalves has created an installation that mimics the original arcade version of Pong, recreating it in analog form and giving it a live-action spin. Using a network of arduino processors, infra-red sensors, printer head guts, and a variety of other materials including some old-fashioned wood, the visual similarities are uncanny, even as they create an ironic "post-digital" tension between 1970s-era analog techniques and a markedly-digital icon to emerge from that era. However, the wit and finesse of Gonçalves's project lies in his use of hairdryer fans and a ping pong ball to carry out game action. What viewers actually see, when they look at his installation, is a real video-monitored, joystick-controlled table tennis game. Gonçalves is hardly the first artist to find inspiration in Pong, but he seems to be among the most successful at achieving the physical interaction and social fellowship originally intended by its creator, Nolan Bushnell. On that note, the game was meant to be played and Gonçalves's prototype will be presented March 28th at the Lisbon chapter of the Upgrade discussion series. - Marisa Olson

Another remix, I built this a couple of months ago:
http://www.itu.dk/~friism/blog/?p=41