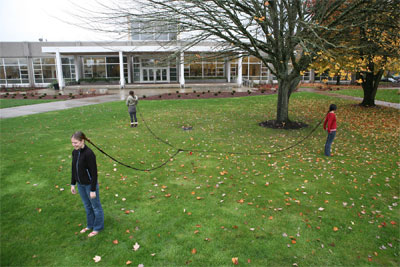 At times, identifying a group of artists' work under one broad umbrella can be homogenizing or even censorious as it pushes their practice into the preformed box of genre conventions and limited identifications. This has certainly been the case with so-called "feminist art," not lastly because the very notion of feminism has shifted over time, along with the concerns of contemporary women. Nonetheless, the moniker has been an important vehicle for a variety of voices, and like all social movements, feminism depends on the participation of a multitude to thrive. These are the tensions (and opportunities) that inform the organizational logic of "The Way That We Rhyme: Women, Art & Politics," an exhibition that will open at San Francisco's Yerba Buena Center for the Arts on March 29 and run until June 29. The show indeed includes a multitude of artists whose work ranges from live performance to DIY publications to street art to new media installations, thus testifying to the diversity of channels now used to address the issues faced by an equally diverse population that identify as women. These artists include Nao Bustamante, Vaginal Davis, Eve Fowler, MK Guth, Taraneh Hemami, Miranda July and Shauna McGarry, LTTR, Aleksandra Mir, Shinique Smith, subRosa, SWOON and Tennessee Jane Watson, The Counterfeit Crochet Project organized by Stephanie Syjuco, The Toxic Titties, and others. The explicit mandate of the exhibit is to present "the politically charged work of a new generation of women who use creativity as a form of empowerment and a means for making social change," and the ultimate argument is that "the way that we rhyme" is not only by raising hot topics, but by forming collaborations and coalition to swarm the root of these issues. This recalls the original definition of "radical," getting at the underlying fibers of something and seems excitingly rhizomatic in nature. - Marisa Olson