Go With the Flow
By Marisa Olson 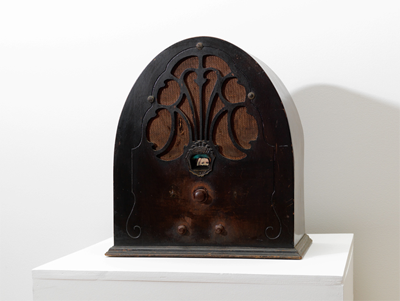 Fluxus is an art-historical movement that shares much in common with new media and is among our field's forebears. Its trajectory reads much like new media's: A network of experimental artists, scattered across the world, dissatisfied with the market's stagnant influence on art, concerned with art's ability to address the present moment, and intrigued by the interplay between concept and medium banded together to collaborate, creatively challenge each other, and co-theorize their niche. The word "fluxus" refers to "flow" and the idea of a fluidity between various media, as we now see in the ever-expanding field of new media art. Fluxus emerged in the 1960s and thrived through the late-1970s. Today, scholars and critics split hairs as to whether the movement is still in play, while its legacy continues to blossom--as in the current exhibition at New York's Maya Stendhal Gallery. "From Fluxus to Media Art," open through April 26, traces the DIY aesthetic embraced by members of the international Fluxus movement, and presents work whose signifying moments occur at the interstices of performance, film, literature, and electronic media. The show traces the movement's relationship to Dada and surrealism and its influence upon pop art, but has a stated interest in considering the path Fluxus paved for media art. Included is work by Jonas Mekas, George Maciunas, George Brecht, Andy Warhol, Nam June Paik, Shigeko Kubota, and Studio IMC. Many of the seminal projects and important pieces of ephemera on view make a trademark critique of authorship, while also paying homage to peers and collaborators within the movement. In the interest of knowing the history of the present, you're encouraged to see this exhibition. - Marisa Olson