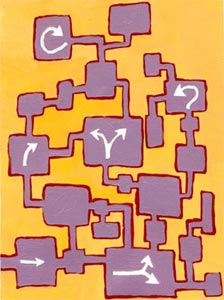 Jennifer Dalton's work very often takes up the art world as its subject matter. Art about art--and the world that revolves around it--can often be cheeky at best, but Dalton manages to pull it off with grace, wit, and originality. She also tends to merge newer and more traditional media in doing so, ranging from internet art to paintings to temporary sculptures. On March 8, Brooklyn-based alternative art space Smack Mellon will open a solo show of her work, entitled "Jennifer Dalton is a Scientist--Not!". This moniker comes from an entry written by a gallery visitor on one of the surveys Dalton facilitated over the last year, in preparation for the show. As the gallery notes, the project puts a unique spin on the concept of site-specific art by revolving the work around the space's audience. The show will include a Powerpoint-style DVD infographically presenting the results of a survey entitled What is the Art World Thinking? (2007-Ongoing), in which "this particular slice of New York's art-going public has been invited to take a short anonymous survey consisting of a few simple questions on topics ranging from art to feminism to philanthropy to politics." The results of a previous poll, entitled How do Artists Live (2006) will also be presented in a slide show, along with a new "'insta-survey" asking viewers to respond to a pressing question by taking a candy." These questionnaires raise interesting unspoken questions about the attention spans and consumptive habits of contemporary artists and patrons, as well as the lack of demographic information we have about these individuals, despite the fact that we now live in what many have called a "database society." If you can't make it to Brooklyn but want to participate in the Q&A festivities, check out Artsurvey, Dalton's online project with Phillip Buehler that combines all the fun of a scantron with the instant gratification of a smooth, speedy interface. - Marisa Olson