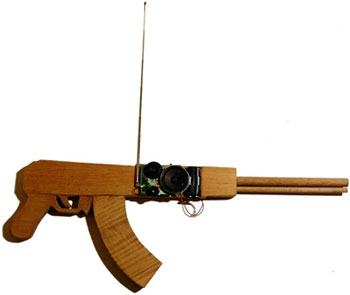 "As we walk the streets our bodies pierce magnetic fields." So begins artist Ricardo Miranda Zuniga's statement regarding his installation, "On Transmitting Ideology" at Philadelphia alternative art space, Vox Populi. This poetic preface underscores the ubiquity of radio waves, in our world, and the potential power of transmission. For while many of the powerful states and dictators Zuniga's work critiques use the airwaves as a means of broadcasting political dogma, the artist takes the space back in his own transmissions. For the show at Vox Populi, he will present an installation of wooden guns in which are embedded radios "broadcasting declarations on freedom and transformation in our society." The AK-47s and Uzis crafted by Zuniga take aim at the mass media and their role in disseminating ideology. This installation is accompanied by a screening of two new video works "that question the outcome of popular notions of freedom, liberty, and the power of capital." Both pieces touch on the political and personal struggles associated with immigration. Carreta Nagua, Siglo 21 (2007) is an animated narrative that also addresses aging and cultural and familial loss through the perspective of two aging TV superheroes, voiced by the artist's parents, and El Rito Apasionado (2007) "takes place in a hotel room where three Guevarrian Neo-Marxist Latino Terror Revolutionaries from Cuba, Nicaragua and Mexico gather to prepare an act against the history of U.S. intervention." Together, these projects exemplify Zuniga's forte for not only performing powerful interventions, but also interrogating the rhetoric of interventionist art and actions. "On Transmitting Ideology" will be open March 7-30. - Marisa Olson