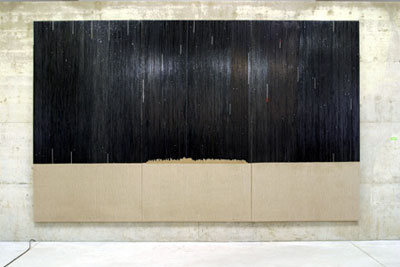 What is one to do with all the world's magnetic tape, now doomed for dustbins and landfills as digital files push out the slinky black tendrils that preceded them in the family tree of recording media? Audio cassettes, VHS tapes, and those ancient vinyl records that came before them were the medium of choice for entire epochs of cultural production and, as such, have stored not only many of the world's most important creative moments, but also a large percentage of German artist Gregor Hildebrandt's personal nostalgia-fodder. Interestingly, it is preservationists and conservators who persist in using these materials to store works, and Hildebrandt's own practice certainly crosses similar territory by serving as a sort of memory repository. The artist uses old tapes to create portraits, sculptures, and other installations. His "magnetic tape on photocopy" pieces (such as Als würde ein Engel kommen (Cure), 2007) force a juxtaposition between two forms known for rendering low-fidelity or "lossy" copies, while creating a rupture, like a trickle of black blood, down the otherwise seamless faces of perished movie starlets and forgotten supermodels. For Schallplattensäule (2007), he built a tall stack of compression-molded vinyl records, a totem whose invisible icons are indistinguishable from the matter on which their aural likeness are encoded. Many of his works consist of cassette tapes, uncoiled and stretched out across canvas, with letters or shapes often cut out into negative space images seemingly volunteering for battle in a duel against "ancient" photography for the prize of best black and white image format. In Kassettenschallplatte (2003) Hildebrandt made the bold move of melting a cassette into the form of a vinyl record, and the result is a gloppy, rust-colored monument to the failure of media to cross-breed. Check out more of his work online for evidence that tape will never die, so long as artists like Hildebrandt continue to have a say. - Marisa Olson