Putting the I in Imaginary
By Marisa Olson 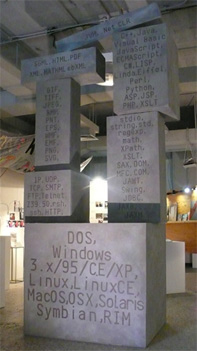 Reading Hayley Silverman's statements about her own work, it's evident that she recently attended a smartypants art school. Of her Free TV (2008) installation, in which a small mirror is angled into position on the floor and spray-painted with the eponymous phrase, she says "The mirror exemplifies the fallibility of showing the fixed image as a means of conveying self, and questions the immediate material construction of objects that frame what we perceive." Such Lacanian readings, and a consistent concern with critiquing the tropes of modernism, are peppered throughout the young artist's work which offers physical stand-ins for theories about the Symbolic and the Real. Seemingly left out of the infamous Lacanian triad, she invokes the concept of the Imaginary, but perhaps this is a triangulating force bequeathed by Silverman to her viewers. Her sculpture, The Everything is a Stonehenge-like assemblage using traditional stage prop materials (foam, wood frames, faux finishes) to offer a sort of pile-up of tombstones engraved with the names of digital file formats, operating systems, and programming languages. Theatrical appearances aside, Silverman says she intended to create something devoid of performativity, but rather--like its ancient representational forebears-- a structure that generates a monumentality seemingly predetermined by the eventual extinction of the systems it celebrates and the people who celebrate them. There is, in fact, a kind of sharply ironic morbidity in her work, which gives it a sort of human charm. In 11:11 (2008), Silverman (also a member of the net art group, Loshadka) seems to admit something that many contemporary internet artists working with readymade materials cannot. Pulling a found image (in this case, a tree whose trunk bears a knot resembling a human eye) from a phenomenologist's archive of found images, she says that the image "either amounts to a greater meaning, or stands to stimulate something meaningless," depending on the viewer's belief system. Take a gander for yourself and imagine what you will. - Marisa Olson

Image: Hayley Silverman, The Everything, 2008