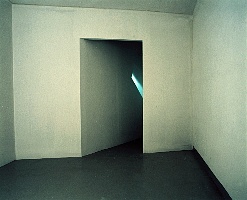 American artist Nan Hoover passed away last week, in Berlin. She left behind a large body of work that has had a pioneering influence on the fields of performance, video, and photography. In a statement about her photos Hoover says, "I am a painter. Everything I do is seen through the eyes of a painter. I only use brushes from time to time." Buried between the lines of this message is an indication of Hoover's tight relationship to her materials--which varied to include not only new media, live performance and photographic media, but also drawing, installation, and perhaps most significantly, light. If there is one thing that cannot go unsaid about her work it's that Hoover owned the light. Indeed, it proved better, more searing, and more beautiful than paint in her many decades of practice, ultimately "shedding light" on the sublime beauty inherent in objects ranging from otherwise banal domestic interiors to majestic outdoor landscapes. In an art world which has, at various times, sought to polarize beauty and intellectual rigor, Hoover consistently proved that the two could live in harmony. An exhibition of her lens-based work just opened at Mannheim's Sebastian Fath Contemporary Art Gallery. The show was in the works before her passing, but is now a retrospective of sorts--a show developed in conversation with Hoover about what it meant to continue her signature first-person visual experiments in a world increasingly mediated by digital experience. A memorial will be held at Amsterdam's Montevideo Institute for Time-Based Art on June 20th. Meanwhile, an online condolence page has been established for the many who were touched by her work to stay in touch. - Marisa Olson