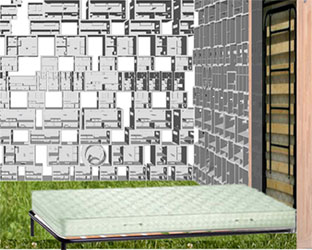 Architectural design is currently enjoying a watershed moment of increased media attention, but among all the discussion of new museums, opera houses, and theatres, there is little attention paid to one of the world's oldest and most significant cultural institutions: the prison. According to a recent Washington Post article, more than 1 in 100 American adults were incarcerated at the start of 2008, making jails among the most popularly-visited sites in the nation. Historically, these buildings have been important tools in the disciplining of societies (including those who lived and worked in them, or those seeking to avoid them), and they've often provided major critical metaphors for the transmission of ideology and power structures-- most famously in the case of Foucault's interest in Bentham's panopticon. But for all the discussion generated about the design of this structure, it was ultimately dismissed as a bad idea, and few new ideas have been proposed. An exhibition at Turin's Sandretto Re Rebaudengo Foundation, entitled "YOUprison: Some thoughts on the limitation of space and freedom," invites 11 international architectural studios to suggest prison designs that not only consider the practical challenges of such spaces (small matching units, confinement, surveillance sight lines, lockdown procedures), but also the contemporary implications of imprisonment. Curated by Francesco Bonami, the show includes a true who's-who of architects, including Alexander Brodsky, Diller+Scofidio, INABA, Eyal+Ines Weizman, and others. Translating these designs and their site-specific psychological effects into the context of a museum space present a unique challenge for all involved, but the results will offer proof of the jail cell's status as unspoken spectacle and insight into the architect's ethical and personal relationship to the places they create. Many have even chosen to use the cells as platforms for the dissemination of information about prison industries, political dissidence, human rights laws, and other socio-economic conditions related to detainment. If you're in the area, you can cast your gaze upon the show June 12 - September 21. - Marisa Olson