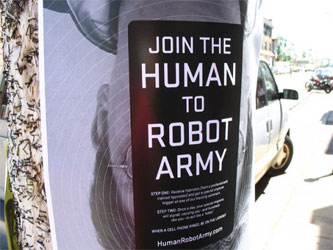 Jon Rubin's work "explores the social dynamics of public spaces and the lives of ordinary individuals." Often working in collaboration with other artists, institutions, and members of the general public, his projects have included setting up a gallery that exhibits only information about the neighborhood's inhabitants, broadcasting an office's telephone conversations through a talking piano, producing a cable access variety show at a senior center, and a variety of fake businesses that traded on interaction and the art of conversation. The artist's two most recent projects offer a glimpse into the delicate balance of precision and irony that render his work so poignant. Earlier this month, at Los Angeles' Machine Project, Rubin's A Practical Demonstration was "an exercise in suspended orbits, suspended disbelief, and circular group formations." It's the latter, the part about people standing in circles, that is so interesting. As the artist played director, a group of local amateur videographers captured a 360-degree image of a stuntman jumping from the gallery's second floor window. (He was going for "a very clumsy 'Matrix' effect.") Simultaneously, a circle of international collaborators documented the activity of the sun over a 24-hour period. The result of all this participatory documentation was an edited two-channel video in which both the jumper and the sun appear to float in mid-air. On its own, such a video project visually resembles many that have come before it, but Rubin sets his apart by devoting special attention to the details of social collaboration, thus creating a more meaningful experience. The same can be said of his current project taking place on the streets of Pittsburgh, in collaboration with the legendary installation art museum, The Mattress Factory. Like many of his initiatives, Join the Human to Robot Army began with a call for participation. Those who were interested could attend a free hypnosis seminar, run by professional hypnotist John Weir and "newly trained hypnotists John Pena and Jon Rubin," after which they would be given a special cell phone ringtone and training in how to respond to the tone. Subsequently, this army of hundreds of phone owners are now receiving daily audio triggers prompting them to act like a robot. In a true act of art as social practice, Rubin plastered Pittsburgh with 150 unique promotional posters that both solicit participation and "make the public aware of the possibility of human/robots in their midst." Just in case the raised zombie arms and beeping noises of fellow Pittsburg residents didn't tip them off... - Marisa Olson

Image: Poster for "Join the Human to Robot Army"