A Message to the World
By Tyler Coburn 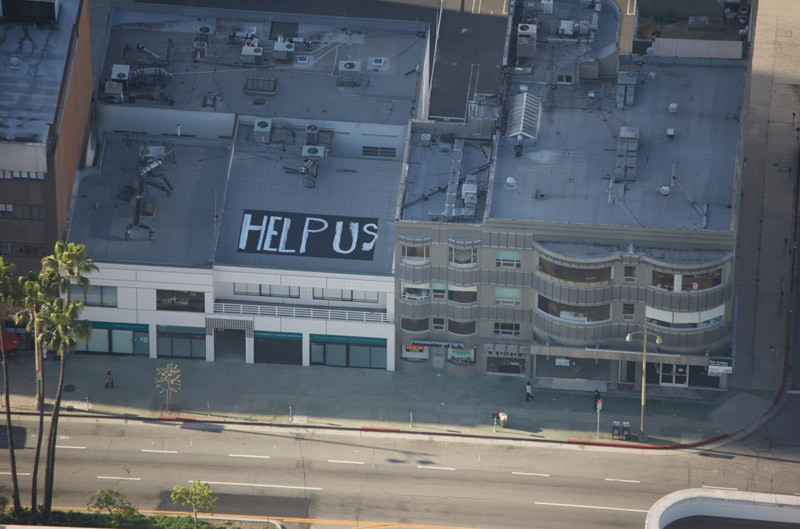 A couple of months ago, a message appeared on the roof of Steve Turner Contemporary Art, loosely painted in white across a black ground, reading "Help Us." Given the gallery's location, just across Wilshire Boulevard from the Los Angeles County Museum or Art (LACMA) and the dazzling new home for all things blue-chip, The Broad Contemporary Art Museum, one would be tempted to infer a dissenting tone in the sign, made by Los Angeles artist Mark Bradford. But as Bradford's message is not actually visible to the windowless buildings surrounding the gallery, and can only properly be seen from the air and via a live video feed the gallery has established, it's clear that the artist's SOS reaches beyond the limits of contemporary art. Bradford adopts a fundamental position of appeal that is heavily colored by its similarities to those of Hurricane Katrina victims, including Angela Antoinette Perkins, who repeated these very words outside the New Orleans Convention Center, on September 1st 2005, and roused survivors into a chant. Seen through this lens, the selective visibility Bradford grants his piece may reference the infamous account of Bush flying over New Orleans while returning from vacation, as well as the extent to which Katrina, like most contemporary disasters, was delivered unto the majority of the world populous through varying levels of technological mediation: mass-media all the way down to cell-phone videos. The gallery's video feed feels particularly poignant, in this regard, in that it documents, in real-time, a message that has already been painted and that never changes. With each day that elapses, in other words, Bradford's entreaty only more compellingly tells its story of expectation, desperation and thwarted relief. - Tyler Coburn