Knitting Circles Around the War
By Marisa Olson 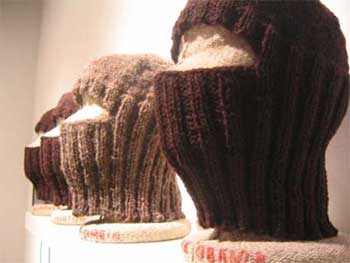 Cat Mazza is a practitioner of what sociologist Betsy Greer has called "craftivism." She's used knitting and other needlecraft-related processes to address pertinent political issues. Her projects are particularly adept at effecting a tactical turning of the tables on issues; for instance, using hand-made (though often computer- or software-assisted) processes to address labor conditions. Her latest project is similarly successful at fighting fire with fire (or should we say "fiber"?), parodying a US government program--even using its own explicit instructions--to critique the ideas behind it. Stitch for Senate is a contemporary take on the historic practice of charitable knitting. During WWII, women and children supported the war effort by knitting clothing and protective gear for soldiers abroad. Following the US invasion of Iraq, Americans were encouraged to make similar efforts for soldiers stationed in Iraq and Aghanistan. However, as Mazza points out in a video on her site, this war is not as popular as WWII, consequently neither is the knitting initiative. On the fourth anniversary of the invasion, in order to spur more thought and dialogue about the war, Mazza launched Stitch for Senate which encourages users to download patterns and knit helmet liners not for combat troops but for every member of the US Senate (the legislative body that votes to declare war), giving them the responsibility of distributing the fuzzy armaments. Meanwhile, the website is a space for documentation of these efforts as well as posts by users about war-related discussions and acts of charity, patriotism, and activism within radius of their own local knitting circles. A few helmet liners won't unravel the war, but as with craft groups before them, projects like these do provide a safe platform for approaching (or stabbing a needle into) bigger issues. - Marisa Olson