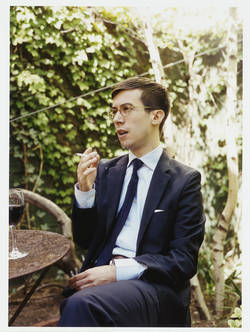 João Ribas is a curator and critic at the New York-based arts non-profit the Drawing Center. In addition to his tenure at this institution, he has curated multiple exhibitions elsewhere (at Artists Space, Bellwether, Guild and Greyshkul, among other spaces) and maintains the online platform Expanded Cinema. He recently curated a group exhibition at Andrew Kreps Gallery entitled "Standard Sizes" which "presents works that look to standards and formal procedures to displace the idea of expressive subjectivity as the domain of art." Arguing that individual subjective expression has become "deradicalized" due to its democratization, the show brings together a selection of works which converse with formulaic structures in an effort to disclose the bounds of expression in a culture emphasizing the articulation of the self. I recently spoke with Ribas about the exhibition, and the larger cultural context surrounding it. "Standard Sizes" closes this weekend, so if you're in New York, hot foot it to Chelsea! -- Ceci Moss

What lead you to the concept behind the show?

The concept comes out of a seminar I've been teaching on the emergence of an expressive subject---this radical individual will---out of Renaissance humanism, we know it more familiarly as Romantic genius, or the creative virility of Balzac or Courbet, and it emerges from within the same political economy that creates the inverted economy of art. The shift from guild-based work in the wake of mercantilism allows for a correlative assertion of certain new values--taste, genius, masterwork----put on the labor of the "artist" as a distinct self. This is a new kind of produced subjectivity, of pazzia or melancholy, with artworks as its objectification---part of my interest has been looking into the iconographic nature of this: the origins of the 'sketch' or the rhetorical use of certain painterly gestures in Dutch painting, or the expressive brushstroke in late modernism. Of course the roots of this abiding interest on the self are much older, back to the cultivation of the self and the Delphic oracle, but today it seems rampant in the narcissism that user-driven media entrains� the notion of the saturnine, expressive self is now deradicalized by the democratization of subjective expression---"have it your way" consensus. There's something pernicious to me about this concept of expressive subjectivity, the way it forces and restricts the way meaning is supposedly catalyzed, or the way it becomes an injunction to disclose oneself. It forsakes shared collective meaning, or formal codes and grammars...The show is thus as much about the standardization of canvases in the French academy, as it is about Pierre Menard's line-by-line rewriting of Don Quixote as a inherently meaningful act.

I noticed you curated exclusively individual artists for the show. How would the exhibition have differed if you had included artist collectives or groups? Was this ever a consideration?

That is an important point----I think it was because the idea is not to derail authorship, a perennial hobbyhorse, but to delimit the markers of subjectivity. They are not the same thing. So the notion was: could you have a singular subject who produced or set off meaning, an effect, rather than the affect, of meaning, a subject who was still soliciting meaning from procedural form without relying on this tired notion of the self? That is the point of Duchamp's Three Standard Stoppages, which is a heavy presence in the show. Or for that matter, what differentiates Haydn from Beethoven---the latter wrote fewer symphonies partly because of an emphasis on the expressive, development section of sonata form, rather than the use of rhetorical, gallant motifs�But could this subject also be ceding subjective control through generative systems, or eliciting meaning from iteration, standardization, or repetition itself? The point was precisely to revisit the idea of the singular artist's subjectivity -- how it's formed and fetishized as labor and appended to meaning...this is clear in the way drawing is traditionally defined by a 'phenomenology of the hand': the way it supposedly has some closer fidelity with intention or thinking. That is different, to me, from the Surrealist premise of the cadaver exquis, and its psychoanalytic foundations, or the collapse of authorial intent supposedly allowed by collaborative work. It might just be two or more of these same subjectivities at work in the end, and so the affect could be quite the same---it was for Breton, despite the declared intent, as it was for the School of Rubens, the same subjectivity is reproduced no matter how many people are involved. That's different than say how Haydn worked---in collaboration with a patron for 30 years. There is also the added problem of the value of collective labor...this is a bit too long-winded to get into here, but the valuation of collective labor--collaboration---in late capitalism is problematic. 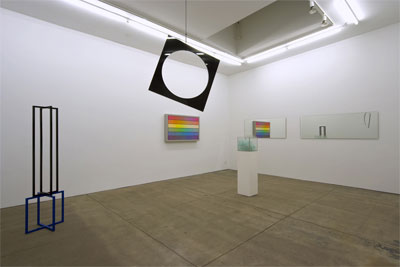 While researching the exhibition, did you notice any significant generational difference in the output and dialogue surrounding "expressive subjectivity" between younger and older artists? In what ways were their concerns similar or dissimilar?

There is a certain tendency in late European modernism that works with similar ideas in formal terms---this legacy is something that has only recently been fully contextualized, in terms of figures like Palermo and Knoebel, who are certainly key figures in the show. There is a definite affinity--and in many cases a direct formal or conceptual link--to their work and the younger artists in the show, and I think it's integral to understanding the work of both to place them within this history, rather than the normative historical line defined by Pop and Minimalism.

Often vernacular forms or symbols are alluded to in an ironic fashion. After curating this exhibition, do think irony continues to remain an effective subversive tool in contemporary expression? If yes, how so? If no, do you think irony's potency has been defused by socio-cultural changes within the production of meaning? What would those changes be?

I actually curated an exhibition last year that was explicitly concerned with this problem...for one, when people say ironic, they often mean that something is being used rhetorically--like the presence of the expressive brushstroke in the show---rather than its simplest terms, the opposite of literal---though that statement is itself ironic...Irony has also been too easily cornered into insipid, unremitting cynicism, a willful displacing of affect in return for absolute neutrality---afforded by class---and arrogant negativity---afforded by over-education----breeding a kind of shared cultural code: I know, that you know, that I know..etc...What are missing are engaged forms of productive irony, like Flaubert or Bernhard, or Polke, or the function of irony in Johns...this irony directed at barbarism or at the vulgarities that really threaten to derail liberal values. We are perhaps a bit to comfortable with the fruits of negative liberty, just as we are with the demand that we disclose or express ourselves... 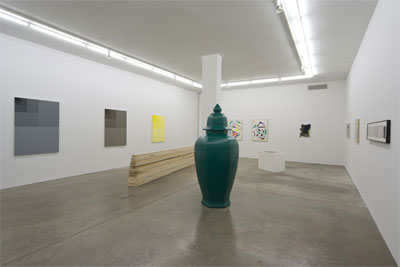 What was your experience like, curating for a for-profit gallery instead of a non-profit arts space? Was this limiting in anyway?

I've been lucky enough to have done several exhibitions in both and the terms involved are completely different, I wouldn't say limiting, at all, merely different frames. Curatorial practice, to me, is about mediating such frames in the end--different contexts, different readings, different publics. I'm simply more interested in what non-profits provide in terms of the production of discourse. But the way the dialectical relationship between the commercial gallery world, and non-profits, is historicized is something that I think needs to be revisited. In the last decade, commercial spaces have arguably done more to support what can even loosely be called 'difficult' work than non-profit spaces...that dichotomy, qualitatively, probably doesn't even really exist anymore...that being said, the proper contextualization of work only takes place in non-profit spaces I think...but both of these notions belie a profound historical shift...you know, Kahnweiler, Picasso's dealer, tried to argue that museums should neither show nor collect contemporary art, that the market should sort it out and let history determine things...is it old-Left nostalgia to hold on to this romantic, pre-lapsarian notion of the alternative space?

Is there real substance behind this …rather extreme statement? I'm very intrigued.

Where does this guy teach seminars, handsome boy school for junior models? "rather extreme statement," I can't tell which has more substance, the outfit or the intellectual outfit. When I grow up, I hope to be a critic/curator too.
Keep dreaming.
Ricardo Escobar