Making Inroads: Art in General's Only Connect at Bloomberg Headquarters
By Gene McHugh

Bloomberg Tower, the headquarters of New York City mayor Michael Bloomberg's global business news and information corporation, Bloomberg LP, is a sleek, glass and curved steel skyscraper in midtown Manhattan which forgoes cubicles and executive offices for an ostensibly non-hierarchical and sans-wall flow of physical and digital information. As an allegory for globalized information dispersion, this opening-up of interior space reflects the much-discussed contradictions of globalization, itself. Since the building's completion in 2005, the downtown art nonprofit, Art in General, has partnered with Bloomberg LP to produce five contemporary art exhibitions that reflect on this space as well as the model of business practice that it nurtures. The current iteration of the partnership, entitled ONLY CONNECT, features work by artists Larry Bamburg, Tom Kotik, Heather Rowe, Mafalda Santos and Patrick Tuttofuoco that, according to curator Cecilia Alemani, "infiltrate" Bloomberg Tower and offer alternative "systems of communication and exchange that rely on basic materials, fragile geometries or simple, sometimes even natural forms." Given the overwhelming environment of the office building itself, I had to ask what kind of critique could productively challenge or transcend the complex ideas embedded in its surroundings.

To view this exhibition, you need to do some legwork. After setting up and confirming an appointment, I arrived at the ground floor entrance to Bloomberg Tower and proceeded to sign in with the security department. I smiled as my picture was taken by an automated camera and digitally inscribed onto a badge that was presented to me moments later. This badge allowed me to ride an elevator filled with flashy video, shiny lights and easy listening music to the fifth floor where I met a liaison who told me that I would be meeting with another, more appropriate liaison. I waited for my second liaison on a designer red couch adjacent to the snack bar and fifty foot glass walls flashing stock prices and lightning bolts. The second liaison arrived shortly, and began the tour. In the same general proximity as the upscale waiting area was the first work, Larry Bamburg's fragile kinetic sculpture Whistlers, Chippers, Trillers: One Down (2007). The sculpture consists of a hodge-podge of vernacular materials appropriated from the corporate office environment such as horizontally rotating pedestal fans, pen caps, funnels, staples and tape. As the various fans rotate, they initiate a gee-whiz chain of events and ultimately make what sound like birdcalls. I asked the liaison how the piece was received in the space and she told me that the employees found the birdcalls amusing and wondered how it functioned. Positioned within a slick room, the piece's simple gesture, and absurd machinations, seemed to parody notions of technological progress. 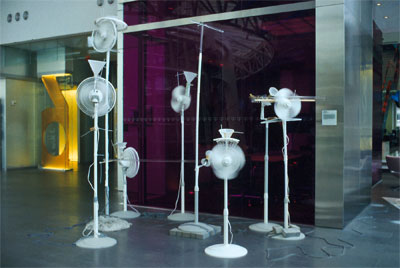 From Bamburg's sculpture I was led past a daunting sea of global customer support terminals to two works installed on the walls of glass conference rooms. The first, Open Range (2006) by Italian artist Patrick Tuttofuoco, is a vinyl collage detailing the integrated "Chindia," an imaginary utopia where architectural and cultural elements of China and India create "connections between different cultures with an enthusiasm that is rare to find in a world where international relationships are too often solved through conflicts." The integration of the cultural artifacts of each of the two countries is simultaneously seamless and violently fractured, suggesting the internal contradictions that are present in the concept of "Chindia" to begin with. The second wall piece is Mafalda Santos's Sharpie drawing, Inside Trading (2008), a series of interconnected diagrams externalizing Bloomberg LP's massive daily information flow and the labyrinthine pathways. Here, as in Bamburg's Whistlers, Chippers, Trillers: One Down, the works function less as strident infiltrations as much as they simply blend in with the scenery, offering subtle but subversive departures from the ambience. 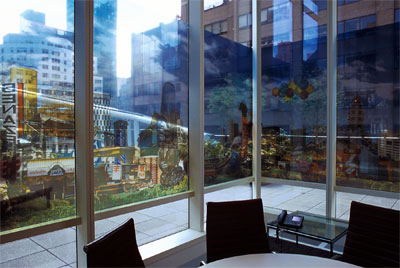 Installed in an elevator lobby on the fifth floor, Tom Kotik's Untitled (for Jan) (2007) is a music stand with two small, pulsating speakers integrated within the thin metal surface of the music stand's head. The silent formal assemblage of the music stand, the speakers and the dangling wires provide the viewer with a clear-cut sculptural representation of aural mediation, one which is palpably disrupted when the viewer is denied the experience of actual sound. By subtracting the audible information that one would associate with all the formal elements of the sculpture, Kotik's piece adds to a sharpened awareness of the digitally buzzing spectacle emanating throughout Bloomberg LP's environs. 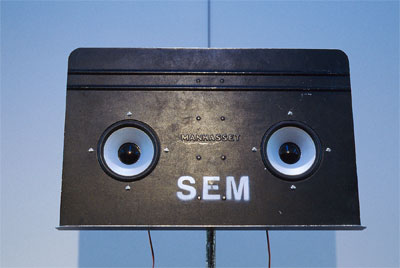 But while Kotik's work is able to bring into focus the conditions of the environment in an understated fashion, the New York-based sculptor Heather Rowe's Three Flying Buttresses for a Wall (2007) illuminates the setting by asserting itself as utterly different and unconnected to the rhetoric of connection present in the rest of the exhibition. The piece is, as its title implies, three wooden flying buttresses placed against a wall, scaled to human size and bisected by a plate of clear glass. In its Home Depot take on Chartres, Rowe's piece seems out of place in the space, but its peculiarity might paradoxically be why the piece works well in the exhibition. By inserting a motif of Gothic architecture, rendered in wood and divided by glass, the work exerts a sort of punk rock haughtiness that holds up well in comparison to the quieter permeations contained in the show.

Despite the strength of the individual works and the provocative interconnections between them, the Bloomberg architecture seems nearly impossible to rival. As a consequence, the show falls short of offering a powerful challenge to its surroundings. However, if 'infiltration' is defined as intentionally minor and circumspect incursions, this show comes up a success.

Gene McHugh is Rhizome's Editorial Fellow. He is currently a graduate student at the Center for Curatorial Studies at Bard College and has worked previously with the political consultancy Devine Mulvey, and the Sana'a, Yemen-based magazine, Arabia Felix.