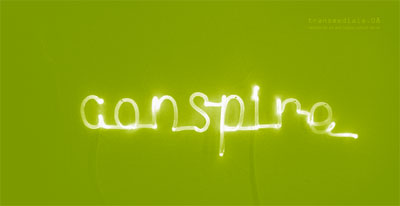 Over the course of its twenty-year history the annual Berlin festival Transmediale has undergone multiple transformations. Originally an offshoot of the Berlin Film Festival, it grew into Video Fest, then Transmedia and now Transmediale- an evolution that reflects the trajectory of the medium from a specialized activity to a ubiquitous component of daily life. Organized under the theme of "CONSPIRE", this year's festival seeks to, "question, subvert, undermine and bypass the unspoken rules, hidden codes of conduct and assumed truths entrenched within our information driven communication cultures and ideological belief structures." A large and truly international exhibition interprets the conspiratorial through a series of thematic 'clusters' including "Bio-Organic Systems," "Twisted Realities," and "Alternative Science / Science vs Fiction." The annual conference and keynotes includes papers by an equally diverse cast. Of particular interest this year is the session "Web 3.0: Conspiring To Keep The Net Public," which will focuses on the question of "who controls the rights, identities of the users therein" and the increasing commodification of online data and personal expression. Moderated by runme.org co-founder Olga Goriunova, the panel is composed of an international group of theorists, activists and artists including Seda Gurses, Fran Ilich, Felipe Fonseca, Michelle Teran and Simon Yuill. In addition to the exhibition and conference, the festival also hosts a series of film and video screenings and performances. The conference as a whole will be streamed live for the duration of the festival. Transmediale runs from January 30th to February 3rd. - Caitlin Jones

Editor's note: Rhizome will run a comprehensive review of the festival next week by correspondent Michelle Kasprzak.