Sowing the Seeds of 8-bit Love
By Marisa Olson 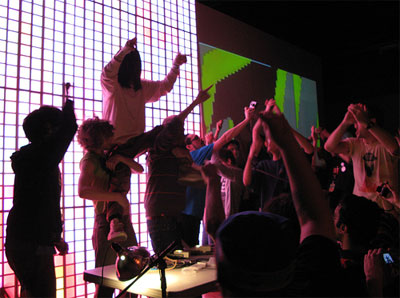 In an art world saturated with fairs and festivals, it can be hard to stand out, but Prague is in good shape with their provocatively-named Sperm festival, which bills itself as a week of "fertile days of music and other media," including electronic art performances, workshops, and screenings. Taking place from March 6-8, the festival occupies a unique position, merging the Western European scene with a thriving Eastern European subculture. Also, this year many American 8-bit artists will be making their first foreign performances at Sperm, in a program organized by New York venue The Tank and net label 8bitpeoples. On the eighth day of March, 8-bit aficionado Mike Rosenthal has curated a program entitled 'Blip,' which will include low-bit music from Bit Shifter, Bubblyfish, Bud Melvin, Herbert Weixelbaum, Nullsleep, Stu, starPause, and x|k, and visuals by No Carrier and noteNdo. On the 7th, noteNdo will also lead a workshop on using the Nintendo Entertainment System (NES) to create visual images. The program is an exportation of the "chiptune vanguard" of which Rosenthal says confidently, "I'm reasonably sure we're gonna blow their minds." The artists selected for Blip continue to invent new ways to exploit old media, and the dissemination of their work at Sperm is a perfect fulfillment of the festival's mission "to be a fusion of the old and new, the familiar and the foreign." If you can't make it to the Czech Republic, try surfing the original Blip Festival's online archives and rest your ears on some of the pioneering chiptunes streamed at 8bitpeoples. - Marisa Olson