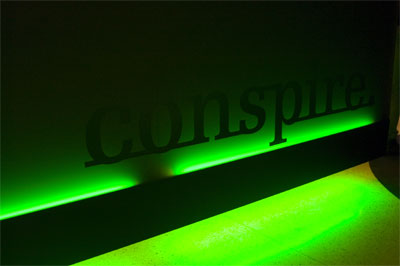 transmediale.08 invited attendees to "conspire" and, over the course of the festival, the possibilities inherent in this invitation were thoroughly explored. From semi-secret off-site events to the constantly idling black cars at the entrance to invoking the name of the mysterious Bilderberg Salon to key works in the exhibition and topics in the conference, the many nuances of the theme presented themselves with clarity and consistency.

Some of the themes discussed in the conference were perennial topics such as privacy, war, and fear. Others were more timely, like web 2.0, (or 3.0 as the case may be), copyright issues, and the current political climate. The panel "Embedding Fear: The Internet And The Spectacle Of Heightened Alert" launched the series of talks and was particularly timely in its expression of the irrational paranoia driving the current emphasis on security and national attempts to prevent terrorism. Moderator Brian Holmes laid bare this paranoia by quoting a hawkish blog, which warned of "the ability of one man to declare war and win", and by quoting military strategist Thomas Barnett, who suggested that one aim of the American military should be to develop the ability to "find, recognize, and kill one person." To lift a phrase from Michelle Teran's presentation in the Web 3.0 panel, these quoted statements could easily be described as "ethically fragile". 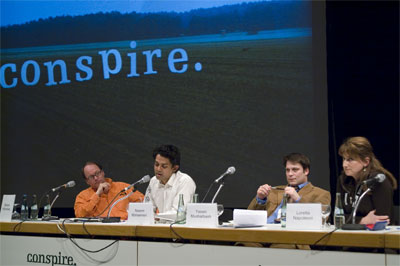 Teran also noted in her discussion of game theory developed by scholar Brian Massumi that what is key is "pushing the rules without breaking them." Game play is a strong way of contextualizing the transmediale.08 theme, particularly as it pertains to conspiracy among the powerful and wealthy. The game of international politics and trade goes by its own rules, and while we - artists, scholars, and activists - may push the rules, breaking them interrupts game play, and therefore has harsh consequences. Knowing the rules and streamlining one's behavior to fit snugly within them was a strategy highlighted in Naeem Mohaiemen's presentation, where he described how, when crossing borders, he smiles and says "hey how's it going?" to border guards, wears a bright, cheerful scarf, and makes sure his iPod earphones are dangling "jauntily".

A lighter tone emerged in several other presentations, especially the inaugural Marshall McLuhan Lecture at the Canadian embassy. Canadian architecture historian and critical theorist Alberto Perez-Gomez invited attendees to "conspire" by thinking critically, trusting our perceptions, and allowing imagination to triumph over plodding utilitarianism. His elegant lecture provided a counterpoint to equally legitimate but darker visions, finding hope in the words of Socrates and other philosophers that have withstood the test of time. The keynote by artist and experimental architect Einar Thorsteinn was refreshingly candid and casual, and also provided a healthy dose of hope delivered in the form of practical advice. To a roomful of seated attendees, many with laptops open, he offered evidence that nerve connections in the human brain develop as a result of physical action, and noted that it is "just not enough to push a mouse." By showing dozens of images of the physical things he has created, his presentation served to underline the point that we can be energized and advance further through acts of creation, and provided a firm endorsement for the acts of artists in their studios. 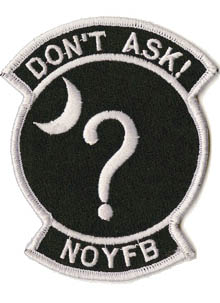 The exhibition and lounge space at the House of World Cultures hummed with activity and, again, mostly evoked a sense of warning and caution. The clusters of works made clear that whether you are in a conspiratorial pact or being conspired against, you are delivered equal measures of fear. Symbology (2006) by Trevor Paglen untangled the warring desires of military pride and secrecy. A framed series of patches, worn by members of the American military engaged in secret activities, illustrated the stark visual identities of these shadowy projects. One patch, white on black and bearing a large question mark in the center, was also inscribed with N.O.Y.F.B ("None Of Your F****** Business"). PleaseSpam.Us (2007) by Jonah Brucker-Cohen in the lounge space offered a space for participants to suggest people worthy of being sent spam, along with justifications for doing so. The PleaseSpam.Us website acts as a locus for conspiring against those who have been deemed to have done wrong, and revealingly, the President of the United States is at the top of the list of potential spam recipients. LADOMIR AB 7th SURFACE (2008) by Marko Peljhan, meant to represent a "spatial and temporal topography of zones that define the Makrolab project," was a beautiful object consisting of glass plates inscribed with symbols, images, and text. The layering of the plates made reading the material more difficult, and this visual palimpsest effectively evoked the density and complexity of the project. LADOMIR AB 7th SURFACE stood out as an example of how several works in the exhibition and lounge acted almost as cryptography, presenting pieces of evidence that may be decoded by some and not others. The curatorial theme was well-served by the inclusion of these works, which emphasized the ability of all art forms, but particularly digital art, to cloak its intentions, background, and references when and if necessary.

Nowhere was the demonstration of the conference theme stronger than in the events which took place off-site. The creators of "the Moving Forest" (directed by Shu Lea Chang and Martin Howse) literally invited attendees to conspire along with them through an epic twelve hour, five act sonic performance using WiFi and mobile technology. A mysterious base was set up in the House of World Cultures, with PD patches being tweaked, equipment being distributed, and various agents prowling about. As part of one of the acts, participants armed with what the artists described as "radio guns" stormed landmarks and maneuvered through the city. As an exclusive event to transmediale.08, the Urban Media Salon acted as a platform for discussion and exchange, but fittingly operated largely under the radar. Locations for the salons, hosted in private apartments, were revealed at the last minute, and guests were invited to share meals with other participants. Conversation flowed, and new bonds were formed over discussion of not only the transmediale.08 events but also other diverse topics that emerged over the course of the evening. Sitting at the dinner table in a stranger�s apartment, I experienced the strongest sense of potential for the conspire theme. Conspiracy in action, after all, can only happen behind closed doors, at a series of intimate gatherings scattered across the city, in locations that were learned a few hours before and scrawled on a scraps of paper, to be forgotten later.
Overall, the tone was sombre indeed, but also bubbling underneath was a call to arms: if "they" can conspire in seats of government and corporate boardrooms, we also can meet and conspire to advance our own objectives. - Michelle Kasprzak

Michelle Kasprzak is an artist, writer and curator. Her practice in these three areas is primarily focused on artistic activities that incorporate technology, with coincident interests in performativity and site-specificity. She is currently based in Edinburgh, UK, and is the Program Director of New Media Scotland.