Repackaging Nature
An Interview with Philip Ross
By John Alderman

It's easy to see Philip Ross as a recent embodiment of an age-old spirit of inquiry, where aesthetics, personal discovery, and scientific knowledge are linked, and all seem to tap into the fertile edges of local industry. In San Francisco that means computing and biotechnology, and Ross's work makes use of both. The transplanted New Yorker has a body of artwork that centers around human interaction with biological materials like fungus, plants, and mollusks. Ross was also curator of the BioTechnique exhibit at Yerba Buena Center for the Arts, and frequently teaches classes and gives lectures, such as one he delivered December 2 to amateur mycologists at the Oakland Museum of California.

His current projects include a long-term effort to grow a large building out of mushrooms, and a new, ongoing salon ("Critter") at the Studio for Urban Projects, a unique cultural center opened in 2008 by Alison Sant and Marina MacDougal. Ross describes the studio as "a collective of collectives," with about five or six contributing programmers, all similarly interested in ecology, education, technology and other related fields. - John Alderman

John Alderman: Can you tell me about Critter and the new center that is hosting it?

Philip Ross: One of the reasons we're interested in urban ecologies is that -- with the writing that's been on the wall for a long time -- we wonder how to make our cities better and more interesting places, so that you don't have to drive out of the city necessarily to get a nature experience. You might just walk down the corner to the Studio for Urban Projects. They've done things like An Unnatural History of Golden Gate Park with walking tours showing how our nature has been constructed.

Often we demonstrate to people how something is done, in a neighborhood space, as opposed to an institution which might carry with it some prohibitions. At Critter, there are fun crossover events, stuff like music or cooking -- interesting things that you might want to do anyway. 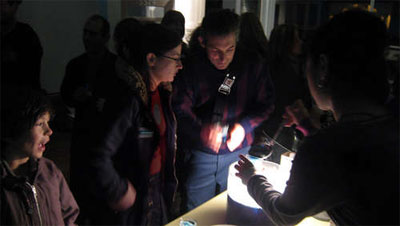 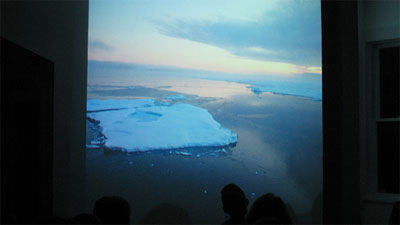 Images: Snapshots from the most recent Critter event, a presentation by Adriane Colburn and Amy Balkin

So it's more hands-on and educational?

Absolutely. We're not interested in doing shows so much, but exploring things that people can do themselves or contribute to. The next event that I'm having, called "Clone Home," is a drop-in plant-cloning afternoon. We'll serve tea and have live music, and you can bring a plant and we'll have people who will show you how to make cuttings of it. We'll also have people who do more advanced cloning, like orchid growing, and people who can show you how to make genetically engineered plants if you care to. Just basic stuff showing how easy it is to do this, and how if you have a plant you can make all kinds of other things.

Another event is a kimchee contest. There's a huge repository of knowledge in this city around pickling, particularly around kimchee, and there's like 10,000 people whose grandmother makes the best kimchee - it's sort of like chicken soup - so we have an open call to put it to the test with a cash reward. I'm just thrilled to the idea of having a room with 200 open jars of kimchee in it; like a wall of sound, but this will be a wall of smell.

Is this a coming around to something that existed in the past?

I think so, we're at this strange place in history where there's a sense that something is about to be lost that we're not ready to lose yet. But if you can't go to your mother or father or a cousin to learn that, where do you turn? Especially since some of these things don't seem important enough to learn in college.

To me so much of the stuff that is biotech-y is really low tech-y also, or that people don't realize that they're doing all the time. So if your grandmother is making kimchee or you're doing plant cuttings, you're actually doing something that is not dissimilar to what technologists are doing but with slightly fancier tools or surroundings.

So you're repackaging it?

A lot of it is aesthetic redirection, a framing to say that these are nature studies. Most people feel very alienated from nature and they don't know how to get into it, or what the direction is. The ways that people generally interact with nature are like we're living in some archetype of a '70s version of a '50s version of something that preceded that - there's always a recycling of what's considered natural. But genetic engineering is now a naturalized process, like making plant cuttings - this is the way that we connect with nature. So if you're making a pickle you're keenly aware of what's going on in the microbiology of that thing, despite no one saying that you're working on microbiology.

Wasn't cooking an introduction for you to the use of biological materials in your art?

Yes, it was a big point of entry for me. The processes, materials and techniques that you would use for microbiology are in cooking as well. 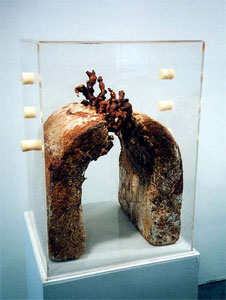 So this follows that spirit of everyday nature by being a more open, event-driven work than the museum shows that you've been involved with?

Nature is a dynamic ongoing thing. When you have art works that stand in for that it becomes kind of strange, so social situations are much more conducive towards art and ecology. You can have a plant cloning session and have a musician right there and they're not necessarily working against each other and can even enhance the situation. If you did that at a gallery you'd have to frame it as something really arty, but in this way you can let that happen out of each person's reaction to it; they learn something and it was a nice experience.

My other reason for doing it as something other than capital A artwork is that you want people to reproduce these things and do them in their own kitchen or show someone else and if it seems friendly and enjoyable then people will probably do it again and invite their friends over to do a kimchee contest or whatever it is. It's something that's easily reproducible and has less of that notion of authority.

But that notion of artistic authority is often a prerequisite for your larger individual works, right?

I work on these mushrooms things for so many years, and if you show them in-process people are disgusted, but if you show people a drawing of it, they go "ahh!" because it looks like art. Kind of like the model of the mushroom building - it's not going to look anything like this at all, but I can show that to a person - an architect engineer or a funder and gain credibility. Of course, if I showed them what it would really look like it would wig them out. But somehow seeing your aesthetic skills at play validates your cockamamie theory.

Growing even just a small building out of mushrooms is a crazy idea, but growing a large one… that's insane!!! I wonder if Philip Ross has been eating some unny mushrooms??? ;O)

I think what Philip Ross and his colleagues are doing is really great. It's very different but brings nature and biology back into society. Something we seem to have been distancing ourselves from more and more each year. I love his works of art.

New breakthrough. Researcher and scientist always like to try develop something never before. I wonder can the mushroom be eaten.

Wow, I remember what people USED to do with mushrooms in the past. Who would have thought we would look at mushrooms as art?? Sounds like "mushroom evolution"!

Wow! This is a great idea even it is a bit mad! But who knows, most great ideas were seen as made ideas in their birth!
Dan

Those are some serious projects!

I found this work really intriguing, the 'Pure Culture' series is visually very thought provoking, and makes me think about the dynamism of evolution. The unceasing battle of nature to grow, survive and replicate.

It's a thing a beauty, props to Philip for sharing this with the world.