Tools of the Trade: Albert Hwang's WireMap
By Rhizome 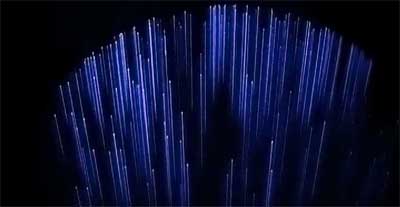 In a combination of software development and 3D interface design, Albert Hwang's Wiremap is a multi-view map created with strands of fishing wire that refract 3D projector scenes and bounce back the revolving imagery to viewers - producing a representation of an object in 3D space.

According to Hwang, from the projector's single-point perspective (at the very front of the installation) all the wires appear evenly spaced. Move off to the left or right however, and by degrees the randomized dimension of depth settles on the wires at different angles to create a topographical form.

Hwang says he would like to explore wire displays in a broad range of new installations and is already working on expanded tweaks on the current design to have a bigger, more detailed display framework. In his Wiremap installation at the the 2008 Last Hope Conference in Midtown Manhattan, he was able to produce a green and blue globe with topography and directional changes according to keyboard and mouse input.

To create Wiremap, Hwang used the open source programming language Processing, and says it was an ideal platform for the project:

"When I began...I had very little computer programming experience. Knowing what I needed, I waded through Java GUI tutorials only to be continually faced with frustratingly confusing Java jargon - I needed a programming environment designed to give graphic feedback instead of visual feedback. Processing, an open source programming environment built on top of Java turned out to be a perfect fit for the project."

Since this is open source, Hwang provides his downloadable source files on his site and encourages others to develop their own Wiremaps and contribute to the evolution of the project with their own experiments. - Melody Chamlee