Let It Spin
By Marisa Olson 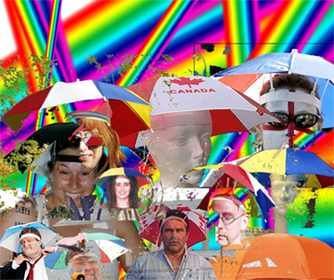 Imagine an art collective whose practice--on the surface--revolves largely around inside jokes, self-congratulation, and the unabashed display of consumption. Throw in a fine balance between fearless experimentation with form and a general disregard for traditional aesthetics. Sounds like international biennale material, right? In fact, it's "Double Happiness," the net art collective who today celebrate their first anniversary of online rabble-rousing under the moniker of this popular Chinese calligraph. When the group was invited, via email, to ruminate on this auspicious occasion, "Dub Hap" co-founder Borna Sammak replied, "I've noticed that those outside the art community seem much quicker to 'get it' than art people." Then again, he also boasted, "I pride myself in having the worst website on the internet." Indeed, the group's site--also managed by artists Eric Laska, Evan Roth, Jeff Sisson, and Bennett Williamson--is chock-a-block with the fruits of inordinately long websurfing sessions: frayed gif mashups, hilarious if sometimes unnerving audio loops, shameless resizes calling for inconsistent page widths, ekphrastic word/image paradoxes, and very often beautiful collages of similar images (graffiti tags, gummi bears, umbrella hats... Google Image Searches are their friend) that not only signify through combination and quantity but overwhelm the viewer with a sheer cascade of visual awesomeness. In many ways, the blog recalls the motto of OG net artists Jimpunk and Abe Linkoln's classic site, Screenfull.net, "We crash your browser with content." Double Happiness has the fresh spirit of a sketchbook alit--a sort of exquisite corpse in which no age or end is predeterminate of today's chaotic link-dump. Ultimately, if Double Happiness revolves around an inside joke, then the joke is shared by all of us. As Williamson reasons, "I enjoy using the internet as a medium for dubhap because online we already view so many disparate things through the all-equalizing frame of the browser window." The default conventions and sense of visual perspective in motion on the site are ones in which all web surfers share. These guys are just letting it spin to the next level--like the shiny chrome rims they claim as a metaphor for life. - Marisa Olson

Image Credit: Borna Sammak, continuing on the quest to make the worst jpg ever (Screengrab), 2008.

made in collaboration with zac davis

Hi, Marisa,
Good summation of what Dubhap and other surf clubs do ("is chock-a-block with the fruits of inordinately long websurfing sessions: frayed gif mashups, hilarious if sometimes unnerving audio loops, shameless resizes calling for inconsistent page widths, ekphrastic word/image paradoxes, and very often beautiful collages of similar images (graffiti tags, gummi bears, umbrella hats… Google Image Searches are their friend)")
Am curious, though–Why did you never write this kind of formal exegesis about Nasty Nets, on Nasty Nets, as a member of Nasty Nets?
Or, put another way,
Why is it that everyone talks like an 18 year old in the comment sections of the surf club blogs?
Lots of surf clubbers aren't 18 and can write very well. There seems to be an unspoken convention that only "Dude" and "You rule" are appropriate language for comments.
It's OK to have the formal "one-way," print-style writing on Rhizome but it would be nice if it could be the beginning of an equally articulate conversation in comments (or passing between blogs) rather than just drive-by props.
Best, Tom

This image makes me laugh.

YOUR LAUGH MAKE ME LAUGH
MANIK,APRIL 2008.

Great responses, thanks. Other things to consider:

1. is chock-a-block with the fruits of inordinately long websurfing sessions

but sometimes just dumping files, which looks like work but is lazy