Like an Art Party Where Everyone's Invited
By Marisa Olson 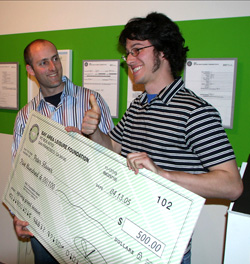 For all that's been said about how behind-the-times academia can be, university galleries are very often the most risk-taking portholes to contemporary art. This fact is exemplified by Arizona State University's Art Museum where curator John Spiak has demonstrated a keen eye and clear commitment to emerging artists and emergent media. The museum's new Social Studies series turns the gallery over to a visiting artist to use it as their lab and concoct an exhibition composed largely of art work in the form of social interaction. The program's second resident, San Francisco Bay Area artist Josh Greene, is already well-known for such work. He's turned a surprise party for his sister into a public event, organized luncheons for gallery workers, and even managed to seduce Sophie Calle into lending him her bed to lie in as a means of sleeping-off a breakup. Greene is the founder of the Bay Area Leisure Foundation, which hands out giant $500 checks to winning applicants who submit "leisure proposals" which are judged by "leisure experts." Among his best-known projects is Service Works, a monthly grant program in which the artist donates his waitstaff tips (an unpredictable number, thus merging situationism and the legacy of "chance operations," depending on how you look at it) to another artist, based again on the merit of their project proposals. The winners have all embraced fun while, in a roundabout way, using wealthy diners' money to do something positive for the world. For his ASU residency, the artist completed a series of tasks under the banner of the disclaimer "Some Parts Might Be Greater Than the Whole." These include chatting with a chimp about art ideas, installing a show of the museum preparators' artwork, acting in other artists' videos, a "public restroom intervention" entitled, "Inequity No More," and perhaps most ambitiously, moving Spiak's entire office, post-it note by post-it-note from behind the walls that usually keep arts administrators' actions private into the public space of the gallery. At long last, Greene's work is evidence that art work about the art world doesn't have to be alienating. - Marisa Olson