Doing It Ourselves
By Marisa Olson 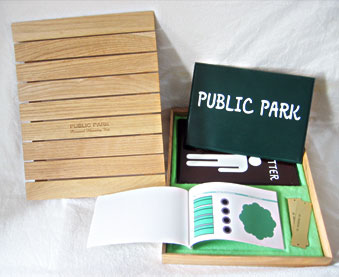 The spirit of D-I-Y is one widely embraced by activists. Not to bracket the importance of collective social action, the idea of "doing it yourself" conjures a sense of taking responsibility for a scenario, and productively taking matters into one's own hands. For this reason, cookbooks, toolboxes, and user manuals are common formal metaphors in tactical media projects focused on mirroring extant tools and techniques to effect change. A new exhibition at Vancouver's Western Front gallery (whose mission is "promoting the role of the artist in determining the cultural ecology"), entitled "Kits for an Encounter" explores the medium of the the kit. Typically portable, efficient, and therefore easily deployable, these are a hybrid between political first aid kits and situationist magic hats. Each of the nine artists present a different take on the kit, ranging from MacGyveresque problem-solving to the fantastical creation of utopian encounters. Azra Aksamija's Nomadic Mosque comments on both the borders of religious communities, and the portability of spiritual identity. The piece "unfolds from a fashionable women's semi-formal [outfit] into a minimal mosque which the artist-architect spatio-temporally demarcates as a prayer rug for two, head covering, compass, and prayer beads." Judi Werthein's Brinco is a tennis shoe "equipped with a flashlight, compass, [and] painkillers to enable those illegally crossing the US-Mexico border." The sneaky sneakers will be sold at boutiques with profits going towards distribution of the "cross trainers" to border crossers. Vahida Ramujkic's Assimil is a textbook "whose exercises and lesson plans 'teach' non-European Union citizens how to properly enter and assimilate into the EU." Each of these works, and additional projects by Steven Brekelmans, Limor Fried, Max Goldfarb, Janice Kerbel, Lize Mogel, and Noam Toran comment on personal space, skill and empowerment, and the deeper import of seemingly small transformations. Later this year, curators Marisa Jahn (POND) and Candice Hopkins (Western Front) will collaborate with Berin Golonu (Yerba Buena Center for the Arts) to release a book of recipes for your own encounters. - Marisa Olson