What a Bunch of Rookies!
By Marisa Olson 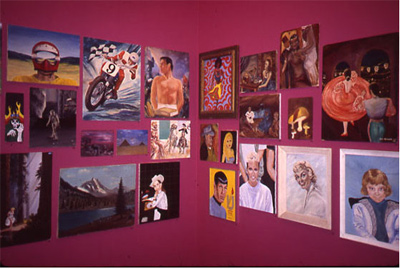 Pioneering internet artist Olia Lialina has written about the fact that most of the web's sites and contents are built by amateurs--those people who put the "user" in "user generated" or who, before the days of web 2.0, took it upon themselves to create what Cory Arcangel calls "dirt style" websites that seem to holler, "Welcome to my homepage!" But as curator Ralph Rugoff points out, "an aesthetic of amateurism has long served as a means for deflating models of academic and market-driven art," harkening back to "conceptual artists and earlier... modernist vanguards." This week, San Francisco's CCA Wattis Institute will open Rugoff's group exhibition, "Amateurs." Up through August 9th, the show includes a long list (Johanna Billing, Jennifer Bornstein, Andrea Bowers, Phil Collins, Jeremy Deller, Harrell Fletcher, Josh Greene, Cameron Jamie, Alan Kane, Long March Project, Yoshua Okon, Michele O'Marah, Hirsch Perlman, Jim Shaw, Simon Starling, Javier Téllez, Jeffrey Vallance, and Eric Wesley) of artists "embracing amateurism as a means for questioning basic assumptions about authorship, expertise, the relationship between artist and audience, and the contingency of cultural values." Formerly director of the Wattis Institute (which has close ties to CCA's curatorial practice program) and currently director of London's Hayward Gallery, Rugoff is known for writing articles and organizing exhibits that comment heavily on the nature of contemporary art practice, and his statement for this show raises questions about the increasingly professionalized nature of the art world, and the resulting assignment of, or prohibition upon, authority. In this case, the artists present work that tends to follow two tracks--either inserting themselves into a position as an amateur (i.e. amateur anthropologists) or inserting themselves into amateurish subcultures, from DIY craft groups to amateur film clubs. The hope is that both types of insertion will become points of entry for elaborating upon broader notions of skill, talent, and authorial subjectivity, prompting viewers to "re-imagine the boundaries of contemporary aesthetics." The underlying impression, here, is that some territories of creative practice have been deemed off-limits by the market, but that artists have long been drawn to these symbolic spaces, if only to embrace their "impurity." This returns us to the context of "dirt style." While internet art is sadly left out of this show, "Amateurs" does trace a lineage for the now-diverse medium's trajectory. Ultimately, it seems that Rugoff has inadvertently given us an anthem for the vernacular web that Lialina sees becoming overshadowed by corporate billboards, describing the amateur aesthetic as "typically distinguished by ad-hoc workmanship and materials, juvenile symbols and markings, misregistration of forms, and a do-it-yourself approach to using technological or scientific hardware and knowledge." Not to be scarred by the mark of shoddyness, I believe this is also known as "taking matters into your own hands." - Marisa Olson