The formulas and algorithms of mathematics may serve as sources of artistic inspiration, but are notoriously challenging to translate visually. Early computer-generated experiments often had a "gee whiz" quality (think psychedelic fractals) -- but now there's a growing cadre of artists using math as a muse in ever-more-sophisticated ways, according to curator George Fifield. He and co-curator Heidi Kayser assembled the work of five such artists in the exhibition "Math and Art," on view at Boston's AXIOM Gallery through April 27.

Mythology meets chaos theory in Nathan Selikoff's "Faces of Chaos" series. A leering death mask and the smiling face of a Chinese warrior are just a couple of the forms the artist discovered while sorting through hundreds of images he created using the Lyapunov exponent, a commonly used measure of how chaotic or predictable a dynamical system is. The artist has long created imagery based on strange attractors, complicated sets with a fractal structure. In this series, using custom software he visualized the level of chaos in strange attractors by calculating their Lyapunov exponent. While his earlier works tended toward the abstract, the artist recently gravitated toward more figurative, often dark images in this series, giving them iconic titles such as Owl King (2006) and Death Mask 1 (2006). In one complex print, Tiled Faces (2006), he assembled a grid of 1,024 such faces, whose imagery and positions within the larger piece represent the four coefficients of the equations used. The results are striking, but their mathematical roots aren't intuitively obvious; in the future, Selikoff hopes to bring the math more to the foreground by reinventing the series as an interactive animation, allowing the viewer to move in and out of the different levels of the equations in order to see the resulting visual output. 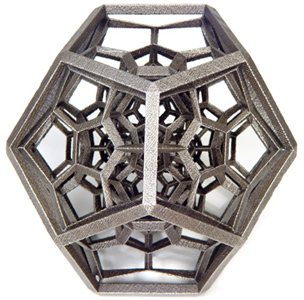 Unlike Selikoff's sometimes sinister forays into chaos, Bathsheba Grossman's mathematically derived sculptures represent "visions of order in the universe, my peaceful places," she explained in her artist statement. Among her small statues on display are the 120-Cell (2004; co-designed with George Hart), whose one hundred and twenty nested dodecahedral faces recall the beauty of a faceted gemstone, and Gyroid (2005), a triply periodic minimal surface whose gently pointed arcs resemble an exotic seed or sea creature. While keeping faithful to the mathematical contours of Gyroid (a surface discovered by Alan Schoen), Grossman gave the piece an artistic touch of her own by adding perforations that allow a closer look at its inner forms. "These surfaces are difficult to wrap a human brain around -- even with a model in front of you, they're just hard to understand -- and it helps a bit if you can see through the surfaces," she explained in an interview. "The perfect diagram is one where the light and the eye can reach every part of the surface at once, so that one truly sees in three dimensions." The exhibition design helps too; instead of presenting the statues in display cases, the gallery staff secured them with cables, so visitors can manipulate the pieces to view them from multiple angles. For the mathematically uninitiated, Wikipedia printouts on a nearby wall explain the math used by Grossman and the other artists.

Former sculptor J. Michael James turned to digital animation to make fractal-based virtual sculptures, six of which are on view in the exhibition. Created using 3D Studio MAX and Photoshop, the animations sometimes venture into the slightly stale, trippy effects that often surround fractals, as when in Infinite Condors (2000) the virtual camera zooms in to a condor to reveal that its wings are made of tiny condors, and zooms in again to reveal that each feather is -- you guessed it -- made of a smaller version of the bird. But while the visuals may lack originality, the underlying premise of using virtual space to transcend the limitations sculptors face is more promising. Without the physical constraints of scale, gravity, and friction, James was able to create structures that could be imagined but not built, or viewed with the naked eye.

Less ambitious though more entertaining are an interactive Flash animation by Keith Peters and photos by Kevin Van Aelst. Titled Particle Emitter (2008), Peters' animation lets the user create "suns" and "antisuns" that attract and repel particles, which can emit trails to create swirling dots that suggest solar systems. It might not probe deep issues like some of the other artists' pieces, but its interactivity proved engaging to young and old gallery visitors alike. Lighthearted and humorous, Van Aelst's photos use mundane objects to convey heady concepts. Slices of Wonder Bread form the golden ratio; pieces of Velveeta proliferate in the fractal pattern known as the Sierpinski triangle. They're a bit of a one-liner, but the photos were among the most accessible works in the exhibition to non-mathematicians. 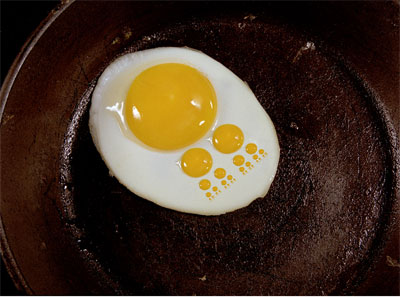 While some of the works proved more compelling than others, for a fairly small show, "Math and Art" offers a rich variety of pieces by artists using math as both a tool and a subject for their works. You might leave the show hungry for some mathematical inspiration of your own, and - after seeing Van Aelst's photos - you might also leave hungry for a snack. - Lisa Delgado