Talk of the Town
By Marisa Olson 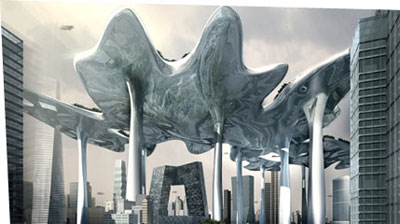 Who could disagree that cities are systems? Certainly not anyone who's ever read an Italo Calvino novel, watched a German Expressionist film, tuned-in to the Jetsons, or witnessed any of the other myriad artifacts of the cultural casting of townships as machines. Of course, some of these machines are better-oiled than others, but as population, worldwide, continues to boom and buildings continue reaching for the stars, there is an increasing role for the artist-savant to intervene in divining the future of urban systems. This platform is the launching pad for the "On Cities" exhibition at Stockholm's Arkitekturmuseet (March 4-May 4, 2008), where four artists' projects push us toward "an understanding of architecture and the city as a dynamic system, consisting of social, economic, legal, political, cultural, geographical and physical layers." Oriana Eliçabe's Rebel Voices embraces hip-hop as a means of defining and asserting one's self within cities. The documentary slide project explores hip-hop as a global phenomenon before looking at its success as a means of local expression in various cities in Europe, the Middle East, and Latin America. Fernando Llanos traces regions on his bike, with his Videoman project, in which he cycles through existing communication channels to simultaneously record and project his immediate environment in a way that heightens awareness of the space by putting a frame around it. The Delhi-based consortium, Cybermohalla Hub draws parallels between "real" and "cyber" spaces by architecting a real neighborhood (the meaning of the word "mohalla" in both Hindi and Urdu) in the form of a cultural lab in which inhabitants can consider the shifting nature of online place-based identities. The members of the artist group flyingCity perceive a lack of landmark images for Seoul, Korea, and they've collaborated with local community groups to envision utopian images that represent commonalities among the population of this increasingly strained city. Finally, with the summer Olympics on the horizon, there's a lot of discussion of the future landscape of Beijing, and the MAD collective are looking all the way to the year 2050, in which they envision a city built atop the current one, transforming Tiananmen Square and the Forbidden City into a lush park and placing China's people at the "center" of the city, rather than the Communist Party. Seen together, these projects imply that, while cities always seem to be growing up around us, they are still built by us and we can take an active role in making them our own. - Marisa Olson