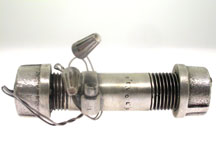 Who hasn't had the synaesthetic experience of a scent triggering a memory? Some argue that the sense of smell is among our body's strongest, and yet--"smellivision" aspirations aside--media culture revolves so much more around our eyes and ears. At present, New York's Lower East Side (a piquant sensorium, to be sure) is home to two olfactorily driven projects. At nonprofit art space Cuchifritos through April 26th is a group show entitled, "If There Ever Was," featuring seven "extinct and impossible smells" that have been "re-created" by Koan-Jeff Baysa, Bertrand Duchaufour, Christoph Hornetz, Christophe Laudamiel, Patricia Millns, Steven Pearce, David Pybus, and Geza Schön. Some of these creators call themselves artists while some work as scientists, engineers, or others with a vested interest in "olfactory images." For instance, botanist James Wong created a hyperreal scent equivalent to a bouquet of extinct flowers, calling attention to art's ability to invoke the absent, fantastical, or what cannot otherwise be said or seen. Neighboring nonprofit Participant, Inc is also supporting artists' exploration of the interface between sight and smell with Lisa Kirk and Jelena Behrend's Revolution Pipe Bomb project. The work was initially conceived as a fragrance by Kirk, who then approached Behrend to produce it as a special limited edition in the form of "a precious metal pipe bomb to contain a vile of [a] faintly aggressive fragrance." The perfume's core elements were determined after interviews with war journalists, activists, and others who've been on the frontlines of revolutions. It bears hints of "smoke, gasoline, tear gas, burnt rubber, and decaying flesh." Doesn't that make you wish this website was scratch-and-sniff? In all seriousness, this project explores the important subject of the commodification and marketing of violence and like Wong's imagined bouquet, makes the issue "more real than real" by addressing it in the realm of the senses. If you're in New York, follow your nose downtown. - Marisa Olson