If You Listen...
By David Michael Perez 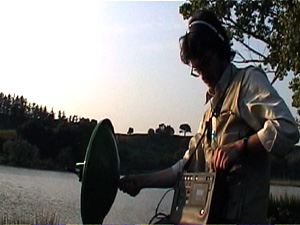 What is the 'natural soundscape,' to borrow a term from theorist R. Murray Schafer, for the Antarctic polar bear? How momentous is this world to the existence of this endangered animal? As the Antarctic quickly vanishes due to climate change, consideration is rarely given to the subtle intricacies of the evaporating sonic geography and its importance. Asking "what the hell is a polar bear doing in Central Park?" by contrasting the soundscape of Antarctica with that of New York City, sound artists Bernie Krause and Andrea Juan explored this environmental concern in their piece, The Poles, for the festival recently organized by Ear to the Earth. The group is an "international network of musicians, sound artists, scientists, and environmental activists" and the festival is in its second year. All the participants work within the field of audio ecology, an interdisciplinary and ever-changing mix of psychogeography, musique concrete, and scientific exploration. The Pole was just one of the many critical projects in the line up this year. The New York Society for Acoustic Ecology held a forum on how urban noise pollution affects our mental and physical health and John Cage's A Dip in the Lake was performed at the Judson Church. The 1978 piece was a sonic map of the terrain of Chicago while this 2007 performance uses the city of Toronto as its source material. As all the artists in the festival make clear, listening to the world is an aesthetic experience that caries the potential for addressing a dire environmental situation.

Not to be picky here but you mean arctic, there are no polar bears in Antarctica.
Great pieces either way.

Antarctica is a land mass, it cannot vanish or melt from climate change.