Nowadays: A Conversation and Screening with Ryan Trecartin
By Ceci Moss 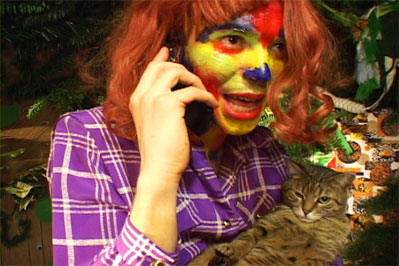 Riotous and multi-layered, Ryan Trecartin's ambitious videos update moving-image practice for the Internet age. His fast-growing body of work explores the impulses and attitudes of a generation whose self-perceptions and relationships are deeply tied to media. Often structured like iChat dialogues, Trecartin's narratives ricochet between characters and actions, gleaning information and enacting existential dramas at hyper-speed. His characters, all constructed collaboratively with his actors, include independent avatars, people composites, culture collectors, and cyber queers- all twisted and true emblems of what the artist calls "a potential part-cyber today." This conversation between Trecartin and Lauren Cornell, Director of Rhizome, will feature short videos and excerpts from A Family Finds Entertainment(2004) and I-Be AREA (2007). The event is part of Rhizome's ongoing New Silent Series at the New Museum. The series will include screenings and performances, as well as a critical conversational strand that will bring together leading scholars, artists, critics, and public figures to illuminate the complex interactions between technology, culture, and creative practice. The series will present artists working at the furthest reaches of technological experimentation as well as those responding to the broader aesthetic and political implications of new tools and media.