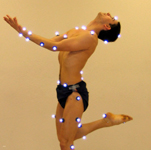 Dancing Up a Storm of Radical Doubt

Dancing Up a Storm of Radical Doubt by Jonah Bokaer: Flashing as dismissive an attitude toward status quo as Merce Cunningham--whose company he dances for--Brooklyn-based dancer Jonah Bokaer and the artists' collective Chez Bushwick have recently initiated a nomadic experimental dance laboratory called AMBUSH. Each monthly installment of the program occupies a different loft space in Brooklyn's Bushwick neighborhood. An outgrowth of Chez Bushwick's remarkably successful SHTUDIO SHOW, AMBUSH is identified by the collective as 'an ambulatory new program of dance, performance, and related forms.' NYFA Current asked Bokaer, Chez Bushwick's manager and founder, to explain the evolution of the collective, their propensity for rigorous interviews of critics and curators, and how no reviews are allowed. [continue reading at NYFA]