ALL ABOUT EVE
By Rhizome

Originally trained as an architect, Eve Hurford began transforming spaces in 1995 in the Berlin club scene with slide projections: dazzling and thought-provoking visual environments, loaded with entertainment and irony. Since then she has produced custom slide and video installations for clients ranging from Love Parade to the Berliner Philharmoniker, designing visuals for both the walls of the Bundeskanzleramt and for illegal venues. Recent exhibitions have been sight-specific constellations of monitors, mirrors and projections addressing themes of urban change and playing visual tricks with the real architecture. Eve Hurford lives and works in Berlin. 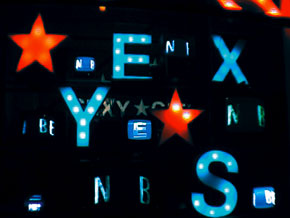