Art Fag City on ArtWurl: An Interview with Nicholas Reville from Participatory Culture Foundation
By Rhizome
I was recently asked to submit an interview to PS122's publication ArtWurl. In addition to my own interview with Nicholas Reville from Participatory Culture Foundation, you can currently read the following texts on their site: Dmitry Vilenski by Thomas Campbell, (un)Reality Television by Benjamin Godsill, Lize Mogel by Trevor Paglen, Lana Lin and H. Lan Thao Lam (Lin+Lam) by Ayreen Anastas. You can also screw the text and just see the art at PS122. Currently on display is the work of Pradeep Dalal, Ricardo Miranda Zuniga, Jenny Vogel, and Ali Cherri. 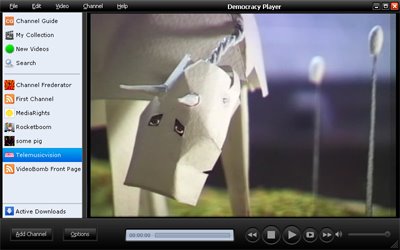 Participatory Culture Foundation is amongst the most well known Internet activist groups working today, and is comprised of 8 full time employees and several part time staff. The core members of this collective first began activist work in 2003, with the launch of Downhill Battle , a website dedicated to music activism. Today, they are focusing their efforts on software development for video broadcasting on the web. Coding is not something many associate with the field of Fine Art, but because it is the structure designers build upon, it is as important as a properly stretched canvas is to a painter. What's more, the standards of good web design are often determined by functionalist aesthetics, which means that the best designers, typically code a lot of work themselves. I spoke to Nicholas Reville, a founding member of Participatory Culture Foundation, over the phone in early October, and we discussed the work the foundation is doing now, and role web aesthetics play in the development these projects. -- Paddy Johnson

Paddy Johnson: You began working on the music activism site Downhill Battle in 2003, which is an ongoing project, but seems no longer to be the focus of the organization. You are pretty much exclusively focusing on the development of the Democracy Player right now is that correct?

Nicholas Reville: Yeah, weâ��re pretty much focused on that 100% at this point. Well, actually there are two projects that have come out of working with the same group of people. Democracy Player is the furthest along, and has been going along for about a year and a half now, and weâ��re sort of hitting our stride in terms of getting close to a 1.0 release. Thereâ��s also a project weâ��ve started that Tiffiniy Cheng is leading up called Open Congress, and thatâ��s even a separate organization â�� for various legal reasons these are all sort of separate projects, -- but, thatâ��s a site that is trying to make information about Congress more accessible, more transparentâ�¦.You can sort of see that we are doing things that are on the one hand very different, you know downhill battle is a music activism campaign, democracy is a software project, and open congress is a government transparency website, but theyâ��re all united by the same ideas of openness and a more democratic media and a more participatory culture.

To read the rest of this interview follow this link.