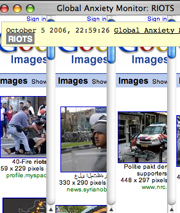 a foundation for multi-visual research

Global Anxiety Monitor and "Historiographic Tracer" represent an instance of research (in the general sense of collecting/analyzing data) and symbolic framing. They are "tactical media" by assuming the role of a "tool" for engaging/ studying a given situation as well as consciously politicizing the data and its means of collection (the tool itself).

These projects and much, if not all, of deGeuzen's work also builds on the practices and theories of people like Martha Rosler and Alan Sekula who practice a "critical documentary" in which the potential for affect provided by photography is neither abandoned nor surrendered to, but engaged to find instances where desires to change reality can be made politically reflexive. viaiDC list