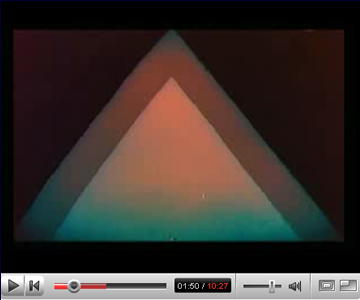 With a background as a painter, and cellist/violinist, Walter Ruttmann found his way to making experimental abstract animations in the 1920s, and later, feature length documentary films.

Ruttmann was in a milieu of painters, poets and musicians who saw in the new media a possibility to expand the limits of the fine arts. They described their abstract films as visual music, seeking to achieve a similar experience in the visual as in music. The overall idea of their works was also linked to the concept of the absolute film; the idea of a universal language of abstract images.

Ruttmann's most well-known film is Berlin-Symphony of a Great City, which utilized the Kino-Eye or Cinematic-Eye technique of Dziga Vertov. This is documentary filmmaking at its most poetic and expressive. His later World Melodies expanded on the synthesis of the visual and the musical with scenes taken from all over the world.

During the late 1930s Ruttmann delved deeper into documentary filmmaking, which likely led to his work on various propaganda films. As Germany moved towards World War II, Ruttmann worked with Leni Riefenstahl in the writing of the famous Nazi propaganda film Triumph of the Will(1934), and later the editing of Olympia (1938). Whether or not Ruttmann would have suffered the same lapse in reputation that Riefenstahl did after the war will never be known, as he was killed on the war front making a newsreel just three short years later.

Weekend (1930) 11'10": Weekend is a pioneering work from the early days of radio, commissioned in 1928 by Berlin Radio Hour. In a collage of words, music fragments and sounds, the film-maker and media artist Walter Ruttmann presented on 13 June 1930 a radically innovative radio piece: an acoustic picture of a Berlin weekend urban landscape.