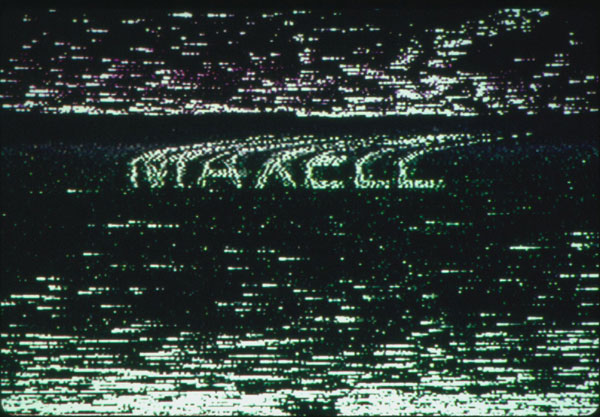 Jonathan Horowitz looms large in the "art as mediacrit" field. He currently shows with Gavin Brown gallery, and has been an influential force on the New York scene since the early '90s. Although he now uses the Internet as a tool and playing field, his work came to prominence during the VCR era. In his piece Maxell, a tape made in 1990 and projected on a large scale at Greene Naftali gallery in 1998, a black screen with the single word MAXELL has been dubbed and redubbed on a VCR so that it gets progressively grainier. But it isn't just degrading--random visual and audial noise is being picked up and amplified with each copy that begins to aggressively overwhelm the original source, in a way that is almost performative. When projected on a large screen, ugly violent electronic sounds and wrenching, spasmodic lightning zaps build dramatically, so that by the end of the tape the video becomes assaultive, almost scary in its sense of total abject breakdown. The piece shows the unintended consequences of mechanical reproduction, data transmission that is supposed to be seamless taken to its most extreme conclusion, so that it actually feels toxic. In other words, Art reveals a dark side to technology that has been there all along. The ultimate irony is the use of MAXELL as subject matter, a brand built on clarity and trust.