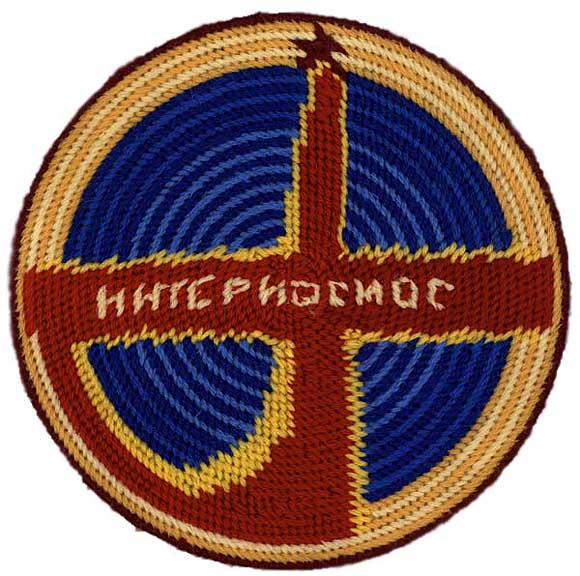 Jim Finn, Chicago: "This is a needlepoint recreation of a spacesuit patch for the international communist space program based in the former USSR. The Interkosmos program began in the 1970s as a way to integrate socialist and non-aligned nations into the Soviet space program; it brought cosmonauts from Cuba, Mongolia, Hungary, Vietnam, East Germany and Syria among others into space. I used this patch in my film Interkosmos, about an East German space colonization mission to the moons of Jupiter and Saturn. The needlepoint patch is featured in the Amber space capsule headed for Ganymede, one of the four Galilean satellites of Jupiter. The writing on the patch is the Russian name for Interkosmos."

From an online exhibit of objects made using the microRevolt website's software, which converts jpegs and other image files into stitchable patterns. This patch is considerably more detailed than the PDF of the pattern linked to on this page, it should be noted--it appears the PDF was only used as a rough guide. See Paul Slocum's "bad jpeg" microRevolt cross-stitch pattern and my cowbug.