Last week the Exploratorium presented Reconsidered Material. The opening night was peppered with one-night performances and material experiments by a wide range of artists. The evening held an an air of honesty as these new material configurations provoked groups of onlookers to collectively experience an evening of perceptual adventures. 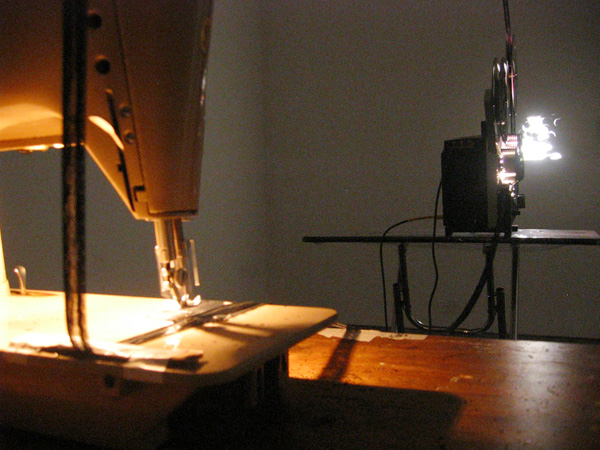 One particular highlight was Mauricio Ancalmo's 1871©. Within a small theater, a 16mm film projector, black leader film loop and a sewing machine mesmerized a roomful of people for little under an hour. The film loop was lead through the projector, up to a hook on the ceiling, and under the foot of the sewing machine such that the needle punctured holes into the film allowing spots of light to hit the screen as they passed by the lamp on the projector. As the sewing machine diligently deconstructed the film, it simultaneously constructed an image projected on the screen. This deconstruction invoked a sense of commitment in the audience. As the film grew weaker, the attention of the audience and the light pouring through the growing number of holes on the film intensified- a collective anticipation of the collapse of the material mounted, as this would also represent the end of an intensely engaging performance.

Mauricio Ancalmo describes his piece as, "Film loop represents cyclical time while the needle of the sewing machine punctures holes continuously deconstructing the film and simultaneously
constructing the image projected. The film becomes an artifact for this performance/sound installation that tells a similar story of dark versus light."