I'm in Berlin for the next six weeks participating in sonambiente, a sound art festival that is dispersed throughout the mitte of Berlin. And thus far this has been one of the most diverse and exciting festivals that I've witnessed. While the underlying theme is the creative use of sound, the festival is composed of performance, installation, radio, sculpture and public intervention and to boot the opening weekend is bracketed by the end of the Berlin Biennial and the beginning of the World Cup, what more could one ask for in one of the greatest cities of the world.

On the opening night I only made it to one third of the evening events, so I will begin with works documented that evening and progressively present documentation of other works over the next several weeks.

On the first of June, I made it to Allianzgebaude am Ostbahnhof, this is an office complex of which sonamiente took over the mezzane, second floor and fifth floor, in which artists were given offices and conference rooms to create installations. Appropriately this part of the exhibition is titled sonambiente_laboratorium, since many of the installations seemed unfinished, experimental or created by young artists in very hipster fashion.

Amongst my favorite works were: 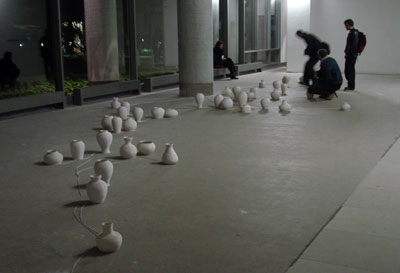 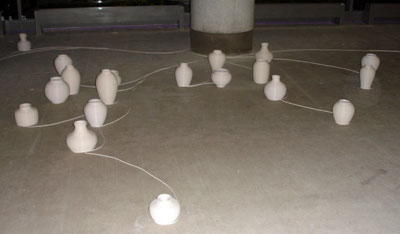 "Koexistenz" by Young-Sup Kim, 2006 in which the Korean artists recreates precious, traditional urns from white shelled audio cables that feed the audio into the speakers sitting within the urns. The urns are connected to play a multichannel composition of traditional Korean drumming created from household, everyday sounds. Perhaps I'm a romantic pushover, but I found this translation of two Korean traditions into contemporary art quite beautiful.

"The Perfect Shot" by Satoshi Morita, 2006 is whimsical, and very well produced. Various sports balls - soccer, golf, ping-pong, baseball sit one small green platforms with headphones plugged into the top center of each ball. Upon putting the headphones on, you hear all the sounds of the given sport from the ball's perspective. Incredibly well produced, each audio composition presents crisp detail, from the soccer players feet running to the ball to swift kick and flight through the wind onto the next player or the ground and the scream and chanting of the arena. Or the baseballs release from the pitchers hand, through the wind, into the painful crash of the bat and through the air into a mit... Perhaps the funniest are the golf ball's sounds of birds in the trees, and the wind rustling for a very long time, I left it before the swing of the golf club, and of course the back and forth of the ping pong. Each sound work captures the pace and excitement of the sport. 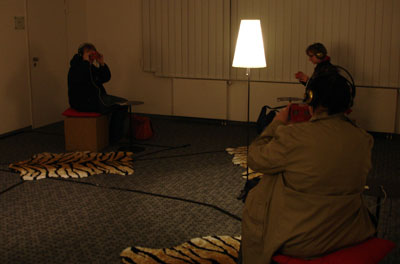 All be it not my favorite work, "3HfA," 2006 by Iris Rennert and Oliver Friedli was amongst the stronger installations as the presentation effectively establishes a 60s mini lounge ambiance. Viewers enjoy 3D images through the viewfinders.

In very Ars Electronica fashion, here are two clear resin perhaps, well some sort of plastic with lots of electronics embedded collars that viewers may wear. Apparently based on the video documentation, when two participants wear the collars and walk toward one another, there's a good bit of clicking from the collars. Perhaps best to review the website:
Martin Bllardi 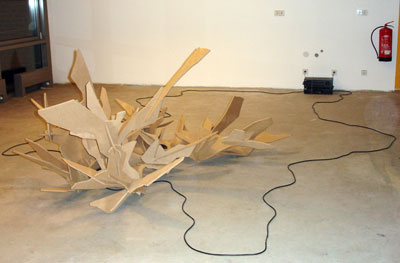 I didn't understand this work, but there's something interesting about it, perhaps the sounds that I didn't record. It is an "Endless space for communications with myself - a vector based score series"

Here is one other installation that was visually nice: 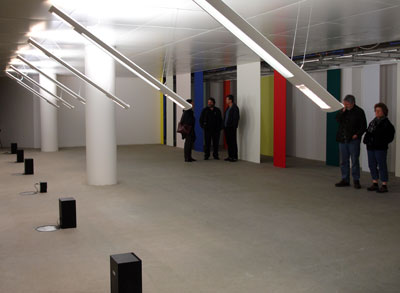 There were several other installations/projects and one performance that I didn't document visually, since they were primarily concerned with sound.