And The Winner Is....
By Rhizome
[....]One of the more exciting places to note is the Williamsburg performance space/restaurant/bar Monkey Town. [....]Kicking off the event last Friday, was the Rhizome curated event Craptop vrs Laptop. [....]Best fitting the profile of tech geek, the husband and wife team LoVid kicked of the evening with one of the most impressive performances of the night. 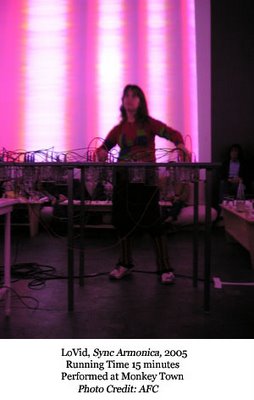 If you are looking at the picture above and saying to yourself something to the effect of "What the fuck is that?", let me clear that up for you. It is a modular handmade analog A/V synthesizer. Get it now? Yeah, well, me neither. As far as I can tell it's a bunch of mason jars stuck into a table with audio/visual cables hooked up to…something. Somehow this team has figured out how to make this thing project video and make sound, and have it look and sound great. The performance itself falls into some of the same trappings of electronic music concerts where you basically end up watching to people fiddle with some knobs all night, but there is some ievitablity to that. In the 90's the willingness to watch this kind of thing tended to be higher because of the novelty of the instrument, but by now attention spans have become a lot shorter. What seperates the stale knob twitching of LoVid's performance from others is that the object they have built has a sustainable beauty that a mass produced mixer does not.

By contrast, my favorite act of the evening began by laying out a laptop, a cell phone, a wallet, bandana, etc along the floor. I have to admit, I was worried that I would soon smell patchouli and that hippy shit was going to be all over this piece; an interesting concern to have about the only "hi-tech" performance of the evening. Now, if we interpret hi-tech computer shit to mean software design, Y.A.C.H.T., (Jona Bechtolt) is a wonderful, but ill cast performer on the bill. The dude was working on a beat up laptop using video and music editing software, he’s not scripting softVNS2.19. However, if he is there to represent the laptop/musician community he is doing a fine, fine job indeed.

Y.A.C.H.T. is an energetic performer, who's contributions to the program guide, are representative of the kind of banter he had with the audience. Within the guide he offered such statements as,

I've been asked by Rhizome to represent the laptop side of a battle against the "craptops." I can't believe the battle exists. I mean, come on, "craptops" are for babies.

I was born in 1980: the era of Nintendo, the Apple II, and CDs. I've been in love with the Gameboy and the NES -- it's undeniable that they've changed my life. However, I don't cling to these tired platforms. This world moves too fast for us to dwell on our childhood toys. People who keep a stubborn allegiance to dated technology are like the luddites who collect vinyl records instead of using an iPod, or worse, drive a Model T on the BQE. You might as well build a fire on top of your stove! 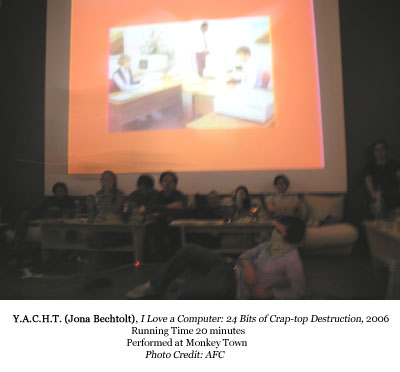 Well than, the gauntlet has been thrown down and Y.A.C.H.T. has officially issued his "En Gard!" or the computer nerd equivalent;
START /MAX/HIGH Craptop vrs Laptop.avi ...um or something. Bechtolt's performance I Love a Computer: 24 Bits of Crap-top Destruction begins with a hilarious video that among other things regales the great innovations of the Internet. He followed this piece with a performance involving his crashing laptop or "virtual orchestra", a microphone, and some tapping and dancing when applicable. He was thoroughly enjoyable. In fact, it's possible he may have even walk away with the Craptop vrs Laptop cup. I'd give it to him. In a seven to one competition, Y.A.C.H.T. comes out ahead of the game.