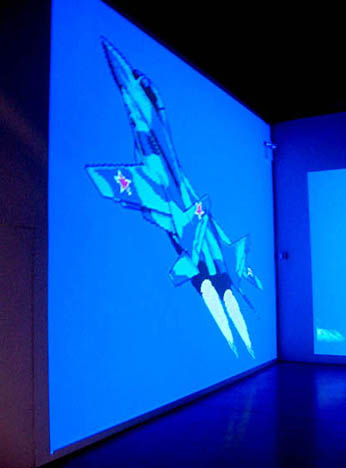 Saturday, Jan. 28 is the last day of "Breaking and Entering: Art and the Videogame" at PaceWildenstein. Planning to go later today; have held off for two reasons: (1) really more interested in videogames for the music and the visual shortcuts than thinking about them as an art movement; and (2) For blue chip PaceWildenstein, final resting place for nearly-dead canonical artists, to jump on this particular bandwagon is a bit like watching your pot-bellied, combed-over high school chemistry teacher "krumping."

But I want to see the Cory Arcangel installation above: that image looks drop dead gorgeous to me, and I can't believe the artnet reviewer's mildly sniping take on this.

The normally dynamic Cory Arcangel offers a large, static projection of a video game fighter jet and clouds to complement a primitive "found video game" displayed on a small portable laptop. Titled Bomb Iraq, the game depicts a crudely drawn bomb that the user can bring nearer to an outline of Iraq by pressing the arrow keys. Its inclusion is fine as a document of America's meat-headed relation to the Middle East, but does nothing interesting with it -- except to prove that video games can be used as found objects just like everything else.

"A static projection of a video and clouds"? Hello, mural painting? James Rosenquist's F-111, maybe? And would it be worth mentioning that the laptop game, originally found on a Mac in a garage sale (see GIF below for a taste), dates to the first Gulf War? That's fifteen years of meatheadedness! Arcangel's pretty post-found object, I'd say. Is this bit of brain-damaged DIY propaganda really in the same category as the arch, Francophone disquisition of say, a Duchamp snow shovel? Perhaps, considered with the wall mural, it's actually a straight-up political statement, reportage from the frontiers of TV-addled suburbia. Maybe when I see the work I won't wonder about any of this. If I'm wrong I'll fess up.

The artnet article by Ben Davis, about current tech art, is otherwise good: it covers Dorkbot and the Superlowrez show at vertexList, in addition to "Breaking and Entering." I like what he said about the inclusive, curious spirit of Dorkbot as opposed to the regular art world's closed-mouth competitiveness (my phrasing). More about that in a later post.

Update: Just saw the show and the Arcangel piece is definitely not "static": the clouds scroll and the jet engines shoot bitchin' flames (that move). One good thing about nearly-dead canonical artists is they generate lots of cash to throw at artist projects. Paper Rad's hyperkinetic video was especially effective in a museum-scale installation. And Jon Haddock's real-world tragedy Sims illustrations looked much better in a huge wall-sized grid than the scattering that were in the Whitney's "BitStreams" show. I was feeling kind of bad about the comb-over reference till I got to the gallery and was met at the door by a big security guard, who lurked not so discreetly while I was looking at the show. Stuffy atmosphere or what?

Update 2: Changed "rich, near-dead white guys" to "nearly-dead canonical artists" since this whole videogame art trend, at least as represented at Pace, while arguably youthful, is very white. I'm keeping the krumping reference because it captures the scene-killing absurdity of what Pace tried to do here.