“Dogs and cables
By ValÃ©ry

Yvon Lambert New York is pleased to announce the exhibition Dogs and Cables by Miltos Manetas. 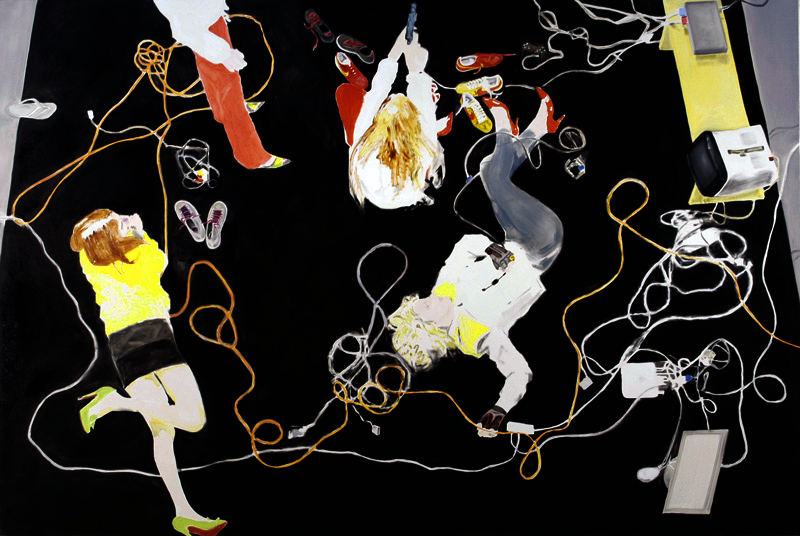 The exhibition will present two new paintings and three Websites, including Jesus Swimming ( www.jesusswimming.com ), which was exhibited at Musée d’Art Moderne de la Ville in Paris (2000) and the Valencia Biennial (2005) in Valencia Spain.

Miltos Manetas is a painter of contemporary life. He is one of the first artists to use computers, videogames, and contemporary lifestyle as his model. According to Lev Manovich, the fact that information society is difficult to represent visually does not mean it cannot be done. He explains that only few artists have attempted, and Manetas is one of them. Representing what humans do-stare into computer screens; type on keyboards; play computer games; and operate various other human-computer interfaces—seem only natural. Yet, Manetas is the only contemporary painter who made this reality the focus of his art.

Beginning from his early work, Powerbook (1995), to the latest Internet Paintings (2001-2005 inspired by Valéry Grancher), and Girls in Nike (2005), his work is a document of the chaotic sensation of living and interacting with the physical evidence of technological development. Manetas abstracts the concrete forms of the everyday realities with a soft color palette and flowing brushwork.