The Prison of Embodiment
By jo 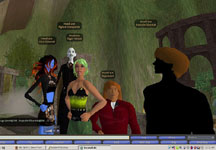 [screenshot by ceteri] As strange as it might seem, VR technology was a natural offshoot of the counterculture - a reliance on small-scale technologies to create a disembodied, connected global consciousness (think LSD, funky musical instruments, Whole Earth catalog of gadgets, and personal computers). As an aside, Fred Turner has a wonderful book coming out on the intersection of the counterculture and personal computing.

Of course, contemporary virtual worlds reveal an insistence on embodiment. Most virtual worlds are avatar-based. Where the counterculture was heading towards the liberation of disembodiment, the opposite has taken hold. In a recent study (PDF) at Stanford, we explored this tension between liberation and embodiment in virtual worlds.

There are many well-known patterns that goven how people interact in the physical world. For example, within a social distance of about 12 feet, the closer two people are, the less likely they will maintain eye contact. This is the elevator effect. Proximity and eye gaze are both signs of intimacy. To keep things in equlibrium, eye gaze compensates for distance when we stand too close to another person. Another well-observed pattern is that men maintain less eye contact with other men than women do with each other.

The question we looked into was: Do these patterns carry over into virtual worlds where people move with mice and keyboard instead of arms and legs, and where virtual gender need not match the real gender of a user? We used a script to collect positional and orientation data on social groups in Second Life over a period of about 2 months.