[The Conductor....]
By Rhizome 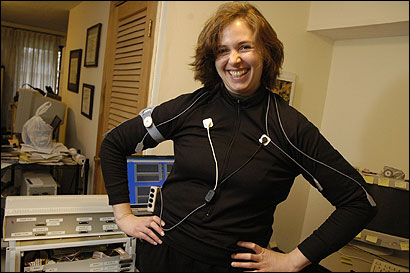 The Conductor's Jacket, is a wearable physiological monitoring system for musicians, designed to provide a testbed for the study of musical and emotional expression.

The project has two aims, Dr. Levitin explained. "First, we're hoping to see distinctive physiological signatures of the emotions that Maestro Lockhart is feeling as he conducts, and then see the transmission of them to the musicians and the audience members. Second, we're hoping to quantify differences in physiological arousal and impact between actually being at a concert versus seeing it on a large screen."

The sensing equipment was designed by Dr. Teresa M. Nakra, herself a conductor and music technologist. Nakra teaches at the College of New Jersey and runs Immersion Music Inc., a nonprofit organization she founded to develop interactive musical experiences that blend traditional forms and new technologies.

You're The Conductor is an interactive exhibit for children to conduct the Boston Pops orchestra. To use it, you simply pick up the custom-designed infrared baton and start conducting. In front of you, you will see and hear the orchestra playing, following your conducting gestures, on a large projection screen. The larger your gestures, the louder they play. The faster you conduct, the faster their tempo becomes.

Here are some midi technologies that can be used. Video sources can also be used to recognize gestures that don't inhibit a performer's physical movement.